Before I tell you about the aggressive blasphemers dressed in black who disrupted our rally, let me briefly mention that the tour for traditional marriage took us to Towson, the White Marsh Mall and Timonium on Thursday. At all three locations, the campaign had wide exposure and great support. 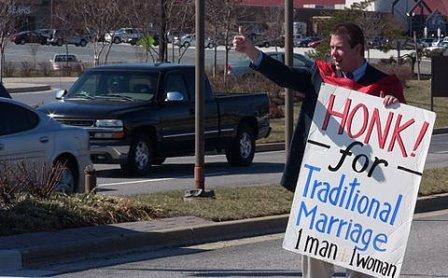 Location: White Marsh Mall
In Towson, as we packed the van, a lady in the parking lot handed me a wad of cash: “Go get something for lunch,” she said, “and come back soon.” God bless her.

This morning, Norman Fulkerson and Gregory Escaro joined us for the campaign.  It was good to have the extra help.  At the Hunt Valley Mall traffic was a bit slow and a number of people passed with an apathetic “what-do-I-care” attitude.

Nevertheless, loads of cars and trucks honked in support.  So much so that a mall manager came out, concerned that our “political” signs might lead patrons to think that their establishment supports marriage.  “We don’t get involved in politics,” she said.

Next stop:  Reisterstown Plaza Shopping Center in Baltimore.  Here the support for traditional marriage was noticeably stronger than our previous location.  Most of the blacks we met were extremely supportive and expressive.

Blasphemers in Black Yell “God is Dead”(Caution:  This video is troubling)

The homosexual movement’s well-oiled propaganda machine jumps through hurdles to find “nice” poster personalities to advance the acceptance of the immoral lifestyle.  The more they hide the ugliness of sin, the more they advance their cause.  For that reason, on television and so forth, a studied veneer of normalcy is tailor-made to avoid shocking American sensibilities.

But, today, on Route 45 in Timonium, the real face of the homosexual movement was visible to the public, this time, without the veneer. 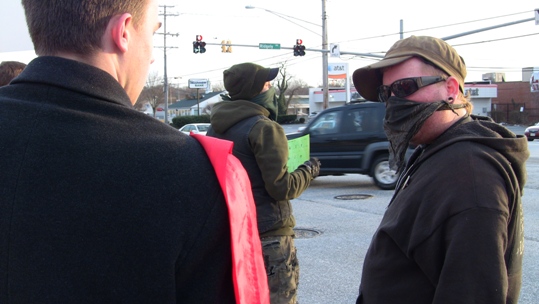 At our rush-hour location, after the campaign was well under way, a beat up car pulled into the intersection.  Four individuals dressed in black within the vehicle screamed insult after obscene insult at us.  We ignored them and continued the campaign.

However, within a few minutes, they parked and approached to disrupt our rally.  Two more women in dark, drab clothing arrived shortly after, then another.  The men, with black handkerchiefs concealing their faces, screamed profanities, insults and blasphemies in our faces.  They also brought crudely made signs in favor of same-sex “marriage,” which they used to block our traditional marriage banner.

Our best response is always prayer.  And that is what we did, invoking the names of Our Lady, Saint Michael and Saint Joseph, the patron of our caravan. The prayers had an "exorcistic" effect, probably like holy water on the devil.

Hearing the prayer, one of the men flung into a rage: “God is dead!  God is dead!” he repeated over and over in guttural, frantic bursts of hatred.  He also repeatedly flung his arm into Matthew Shibler’s face, brushing his nose, saying, “get out of town.”   We all made an effort to remain calm.

They screamed “get out of town!” but we weren’t about to be bullied in that fashion.  Everything they uttered was laced with obscenities. Their breath smelled of hard liquor or drugs, or both.  Then they proceeded to stand in the street, while chain-smoking cigarettes, interrupting the flow of traffic, forcing cars to swerve dangerously.  I believe they were Satanist-anarchists.  And their goal was clearly to intimidate and create chaos and confusion on the sidewalk.

The ring leader, with tattoos and garish ear lobe holes, wore a dirty jacket covered with animal hair, and this inscription on the back:  “Gay rude boys and girls: Don’t accept a life in the closet, this is your world, and it’s not male or female, gay, straight or trans, white, tan, yellow or black. It belongs to us all so let’s TAKE IT BACK. – Leftover Crack.”  His teeth were dirty and yellowish.

As we prayed, they mumbled mockeries and blasphemies against God.  One of the blasphemers screamed: “Jesus died for His sin, not mine.”  Unexpectedly, a Catholic lady, member of America Needs Fatima, who saw what was happening pulled over, and bravely joined us in the recitation of the rosary.  But she was safe standing near TFP volunteer Charles Sulzen who is tall and robust.

Mr. Sulzen said: “It looks like a police station up there.” We looked back and saw police cars and about 6 police officers standing on the knoll.  They called one of the blasphemers aside and told him not to stand in the street.  Unfortunately, the police sergeant refused to ask the blasphemers to move away from our signs.  “They’re on a crusade too,” he said.  I couldn’t believe it.  On other campaigns, we’ve met police officers with a lot more wisdom.

We sang “God Bless America” and “We Want God,” composed by St. Louis de Montfort.  When the rosary ended, we marched off to the sound of bagpipes courtesy of Mr. Sulzen.

Earlier in the day, a simple worker carrying a bucket of squeegees made it a point to stop and shake each TFP members’ hand.  “Thank you,” he said warmly. “Thank you.”  His final comment before walking away was: “God will win.”  Echoing his words, we also affirm – GOD WILL WIN!

Please pray for us.