"I hope satan stomps on you! Hail satan! Hail satan!" said the female student as she yelled against TFP members campaigning in defense of God's marriage at the University of Louisville, Kentucky. 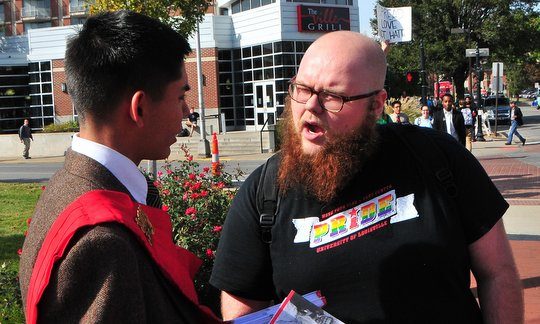 On Oct. 23, TFP Student Action members visited the University of Louisville to encourage students to defend true marriage. To the characteristic sounds of the bagpipes, TFP volunteers chanted slogans, distributed leaflets and held signs asking drivers to honk in support of natural marriage.

Everything happened as usual.  Some students warmly received the TFP flyer, while others refused.  Some accepted it just to rip it up.  The majority of cars that drove by reacted with friendly honking.

However, about 45 minutes into the peaceful demonstration, several students, representing the homosexual movement on campus, began to react. First, a male student attempting to look like a woman approached, walking his dog, and wearing a shirt with the word "pride" printed on it in rainbow colors.  He attempted to block one of the TFP volunteers' signs with his body and became the day's first example of pro-homosexual hypocrisy: preach tolerance, but never practice it.

Slowly, other students dressed in a similar way began to arrive, usually telegraphing their presence with curse words against TFP volunteers, or by displaying their middle fingers.  One male student rudely blocked Cesar Franco's pro-family sign with a rainbow flag.

"So you preach tolerance," said Cesar, "yet refuse to tolerate my opinion?"
Rainbow student:  Silence.

Cesar raised his sign above his head where the pro-homosexual student could not cover it.   The student then attempted to rip the sign out of his hands. After failing to do so, TFP volunteer John Miller politely demanded the student answer whether the TFP volunteers had the right to express their own opinions, even if it differed from his own.

Another pro-homosexual individual arrived with a new sign: "you are loved."  However, TFP volunteers were somewhat perplexed when the woman began cursing at them.  Loved?

None of them answered his question.  A woman walked up after a little while and asked, "If I did [love God], what would you say then?"

"Oh, that makes sense..." she stammered.

With about 35 people, the counter-demonstration of "love" grew more aggressive when a bearded student wearing the same "pride" shirt as many of his colleagues announced his arrival by cursing and blowing smoke in the faces of Cesar Franco and Elias Rubio.  He then blew more smoke into the faces of other TFP volunteers, interspersing his antics with more curses and threats against "discrimination."

When TFP volunteer John Miller asked him where he read or saw discrimination in any of the TFP literature the man could not show him.  The man only advanced against TFP volunteer Joseph Jordan and blew smoke in his face.

Here are some of the sound bites from the liberal students:

"You're spreading hate! Get off our campus!"

"I hate you and everything you stand for!"

"Lay that flag on the ground so I can stomp on it!"

"If people like you are going to heaven, I would rather go to hell!"

"If God exists, let Him strike me down now!"

The TFP members not only received verbal aggression from the pro-homosexual activists but also moral aggression.  One pro-homosexual student attempted to "hug" a TFP volunteer from behind, but was thankfully stopped by a fellow volunteer.  Another activist got very close to one of the TFP members, acting in a lewd and indecent way.  Yet another acted in a similar manner with a dog that was present.

A female student approached a TFP member:"I hope satan stomps on you," she said while recording the exchange on her iPhone. "Hail satan! Hail satan!"

The TFP member calmly replied:  "Record this for your friends, the Immaculate Virgin Mary, Mother of God, is going to crush the head of the devil!"

The student became visibly bothered by the response and began to repeat her chant to the devil, to which the TFP member repeated his prayer to the Blessed Virgin Mary.

The police arrived in time to allow TFP Student Action members to end the campaign without further aggression.

May God protect our nation from the homosexual revolution.

Virgin Most Pure, pray for us! 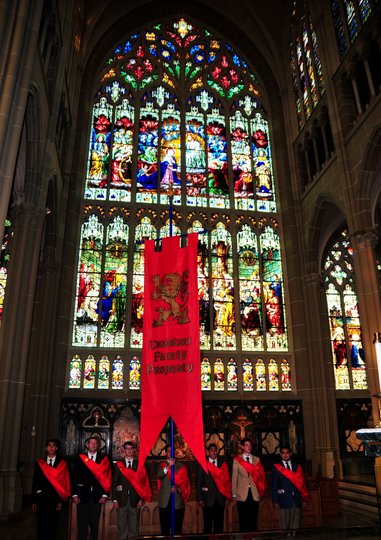 TFP members at St. Mary's Basilica of the Assumption, home to the largest stained glass window in the world