Five minutes after we began campaigning on the waterfront in Newport, the police arrived and verified that our demonstration for traditional marriage was being conducted, as usual, in an orderly fashion on the public sidewalk. But it didn’t take too long before a group of pro-homosexual individuals arrived, attempting to silence our free speech.  They bullied us.  They cursed.  And they spat at us.

The Newport waterfront is lined with small, upscale shops and restaurants and other attractions and a fair amount of people strolled about enjoying the sunny, brisk sea breeze.   When the TFP campaign started, the bagpipes attracted a lot of interest.  They seemed to make the evening even more enjoyable for the families walking on the sidewalk.  But the calmness of the afternoon did not last very long.

A man with a British accent approached, yelling:  “Bigots! Haters!”  He told TFP volunteers to go home and “get out of town.”  It was kind of strange to hear someone with a distinct foreign accent telling corn-fed Americans to go home.   A while later, other pro-homosexual agitators spilled out of a restaurant to harass us.  One of them physically pushed us, another attempted to rip our traditional marriage sign, and a third screamed and spat at us. Without exception, they all used obscene language and vulgar insults.

Hearing the pro-homosexual advocates hurling invectives, a puzzled pedestrian who was on the fence regarding traditional marriage, asked:  “Did they just say what I thought they did?” TFP volunteer Mr. Charles Sulzen replied:  “Yes, they did, we get that all the time.”  The insults instantly turned the undecided pedestrian into a traditional marriage supporter.

The police arrived and established some order.  But even they were harassed by the pro-homosexual advocates who insisted that our freedom of speech be silenced and that we be thrown out of town.  It was fairly clear who was bullying who and the police allowed us to remain where we were as long as we wished.  In fact, two police officers remained nearby for the duration of the campaign. 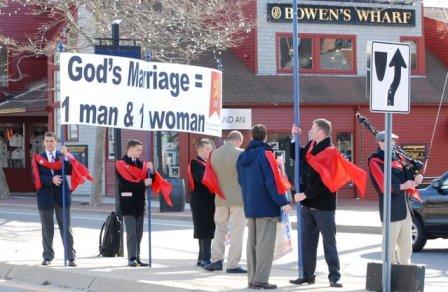 You can’t be both Catholic and Pro-Homosexual

The parents disagreed:  “No. We don’t hate the sin. Our priest told us it’s OK.”  “Catholic teaching is very clear.  You cannot be a good Catholic and support homosexual acts,” replied the TFP member.  “Homosexuality is like abortion, it’s part of the culture of death.”

“No it’s not.  Abortion is a choice,” said the couple and then began cursing as they turned away.

From yells to a handshake

Something unusual happened next.  A young lady stopped to debate, using more insults and clichés than reason.  When I first saw her, she was practically yelling.  After about ten minutes listening to Mr. John Miller, I looked back and saw her shaking his hand in a friendly manner.  Her attitude had completely changed.  “Well, thank you for talking to me,” she said. “I apologize for what I said earlier.  I’m sorry. Now, I’m going to read your flier.  Thank you! ”

Please continue to pray for the victory of traditional marriage in Rhode Island, and for the TFP volunteers who are now traveling from city to city, campus to campus, defending God’s law.