This summer was a historic moment for TFP Student Action (Europe).  The red and golden standard of the TFP was raised in six major cities in Western Europe.  Twenty-five volunteers from various countries joined forces for the first-ever caravan in Germany and Holland to defend the family against the tyrannical transgender agenda.  The caravan began in Bonn then traveled to Cologne, Dusseldorf, Duisburg, Dortmund, and ended in Amsterdam.

After unfurling banners and standards, each campaign started with a prayer and the TFP battle cry, "Tradition, Familie, Privateigentum! Christentum!" (Tradition, Family, Property!  Christendom!)  Bagpipes also captured the attention of the public.

When onlookers saw the large banner, reading, "European Crusade for the Family" and received flyers -- "No to Gender-Ideology! Yes to the Traditional Family!" -- their initial astonished frequently turned into joy and relief:  Finally, someone is proclaiming the truth.

The highlights of the groundbreaking caravan were in Cologne and Amsterdam.  In Cologne, TFP volunteers marched through the streets, handing out many flyers while the pipes and drums played.  As the volunteers rounded a corner, the marvelous Gothic spires of Cologne Cathedral were suddenly visible in their lofty grandeur, shooting into the sky, pointing to Heaven.  The campaign concluded in the shadow of the grand Cathedral and the spirit of the Middle Ages mingled harmoniously with the present-day crusade to protect the family, all for the greater glory of God and Our Lady. 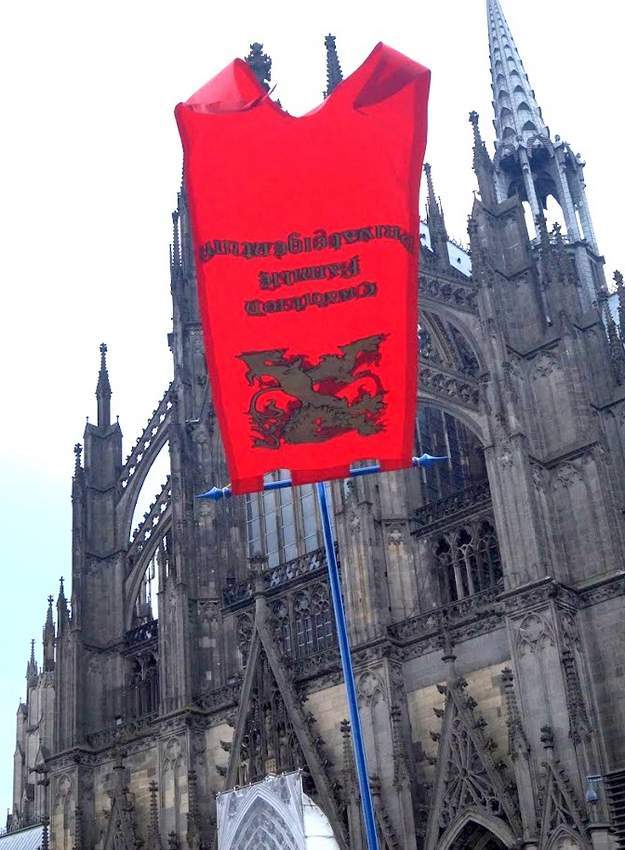 In the sinful city of Amsterdam the campaign took place at Central Station, despite the fact that "Pride Week" was in session and many pro-homosexual activists were walking the streets flaunting rainbow flags.  Undaunted, TFP volunteers pushed forward with the campaign for the family as scheduled.  Amazingly, support from the general public was almost overwhelming.

"To the world, it seems like Amsterdam is a massive, solid and impenetrable wall of liberalism," observed a TFP volunteer. "But we just kicked a hole through this facade and discovered that it's made out of Styrofoam."

However, at one point, a pro-homosexual advocate did display his "tolerance" by ripping the red cape off a TFP volunteer.  He sprinted away.  But a few swift TFP volunteers caught up to him and retrieved the stolen cape.  However, in a display of hatred, the thief had already torn the golden lion off the cape and trampled on it.  In spite of this attack, 5,000 pro-family flyers were passed out in four hours.

By the end of the tour it became clear how the general public, even in liberal cities, do not want moral decay forced upon them by the homosexual movement.  Many Europeans received the TFP campaign as a breath of fresh air as well as a confirmation that "we are not alone" in the struggle to protect the sacred institution of the family. It is time for all to join this Crusade to save the family and restore morality, not only in Europe but the whole world.