Marking the 42nd anniversary of Roe v Wade, hundreds of thousands of pro-lifers marched up Constitution Avenue in Washington, D.C. today.  Their defense of the unborn was upbeat, consistent and clear: abortion is not a "right" and never will be.

After 57 million surgical abortions -- equivalent to the population of 23 States from 1973-2015 -- abortion has destroyed generations, polarized public opinion, yet set in motion a vibrant movement to defend the unborn.  This movement has seen significant gains in the last year: pro-life candidates won elections, Planned Parenthood is on the defensive, abortion mills keep closing, and regional marches for life keep growing.

For the 42nd time, volunteers of the American Society for Tradition, Family and Property (TFP) joined the annual March for Life.  A beautiful statue of Our Lady of Fatima carried by TFP members in ceremonial habit lead the contingent, flanked by an array of tall red banners. Delegations from different TFP-related  groups from several other countries also joined the march.

The TFP marching band -- with bagpipes, drums and brass -- motivated the marchers with hymns in honor of Our Lady and patriotic music.

On the National Mall, TFP volunteers collected thousands of signatures on a petition to Pope Francis, asking His Holiness to defend marriage and family at the upcoming October Synod in Rome.

Republican gains in the 2014 midterm elections will give efforts to restrict abortion more dynamism, causing Planned Parenthood and other pro-abortion groups real concern.  Newly elected pro-life officials will be in a stronger position to defend the unborn in Congress and State legislatures.

In fact, according to The Washington Times, five anti-abortion bills have already been introduced in Congress.  These bills seek to heavily defund Planned Parenthood and add limitations to abortion.

Troy Newman, President of Operation Rescue, said: “We are continuing to witness the implosion of the abortion cartel in America… As the truth about abortion abuses and other dangers become public and are followed by new laws that increase protections for women and their babies, we can only expect the decline of the abortion cartel to continue until it collapses altogether.”

According to a poll conducted with high school seniors by Dr. Dennis Gilbert, sociology professor at Hamilton College, “Two thirds of the seniors told us they believe abortion is always or usually ‘morally wrong.'"

With a more specific question whether a high school senior who becomes pregnant should keep the baby, give it up for adoption or have an abortion, the poll revealed that 26 percent suggested keeping the baby, 54 percent for adoption and only 13 percent proposed abortion.

This is a clear indication that younger Americans are not willing to embrace the lies of the culture of death.

To highlight the anger of the left, Sunsara Taylor, head of the radical pro-abortion group called Stop Patriarchy has teamed up with Carl Dix of the Revolutionary Communist Party.  Both are calling for a revolution -- encouraging their pro-abortion, communist friends to counter-protest the March for Life in Washington, D.C., Austin, TX and San Francisco, CA.

“Every year, the anti-abortion movement dominates the anniversary of Roe v Wade & mourns the legalization of abortion. This year WE'RE FIGHTING BACK!” broadcasted the pro-abortion group.

It is noteworthy how the enemies of the family unite to attack the unborn:  Communists and abortionists. In addition to advocating the destruction of innocent lives, they wish to implement a broader revolution that seeks to destroy Christian civilization itself.

Traditional Marriage is a Pro-Life Issue

As pro-lifers are invigorated with the noble commitment to win the fight against abortion in 2015, we must also remember the growing threat against the sacred institution of marriage.  The U.S. Supreme Court is slated to take up the issue of marriage in 2015.  Will natural marriage be upheld?  Or, will this decision be another Roe v Wade moment against the family?

As the Feast of the Presentation of the Child Jesus draws near, we should implore the Holy Family to assist us in this spiritual crusade to preserve marriage and protect the unborn. 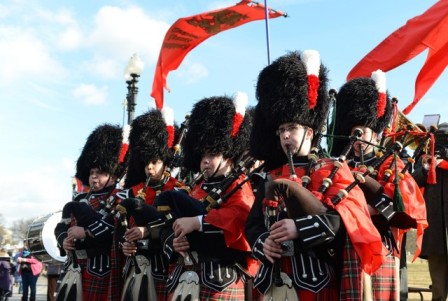