As lawmakers entered the Pennsylvania State Capitol building on Tuesday, March 16 they saw a group of young TFP volunteers rallying support for God’s marriage.  It was no ordinary day since members of the State Senate Judiciary Committee were about to convene for an important vote on the Marriage Protection Amendment.

The proposed bill SB 707 states:  “Only the union of one man and one woman shall be valid and recognized as a marriage in this Commonwealth.” The clause is vital for the future of the family in the state of Pennsylvania given the homosexual movement’s relentless push to redefine marriage.

“Honk for Traditional Marriage” signs and the “God's Marriage = 1 Man + 1 Woman” banner displayed by TFP members drew wide attention at the State Capitol.  And numerous passing vehicles honked loudly to show their support.  Some of the pedestrians that passed by would colorfully shout out, “Honk, honk,” adding, “Sorry, I don't have a horn so this'll have to do.”

TFP fliers were distributed as well, titled: 10 Reasons Why Homosexual “Marriage” is Harmful and Must be Opposed.

However, in an 8-6 vote, members of the Pennsylvania State Senate Judiciary Committee voted against the pro-family bill, deciding to table it for a third time in four years.

The homosexual movement strongly opposes state referendums on marriage because, despite all the anti-family propaganda, most Americans still know the truth: that is, Divine law and Natural Law matter.  That explains why 31 states passed amendments to protect marriage -- including California.  May God grant our nation the type of moral courage needed to ward off the blows against the family. 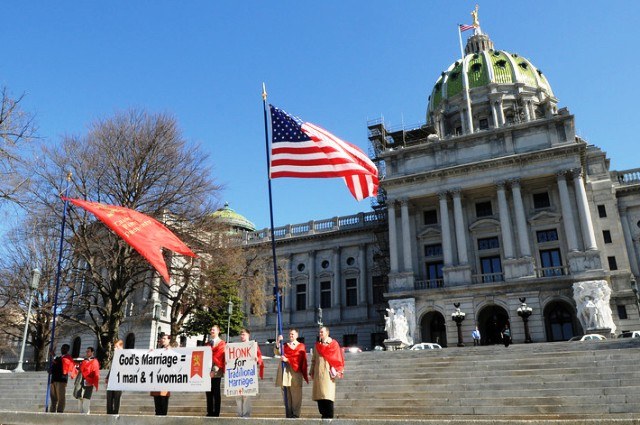