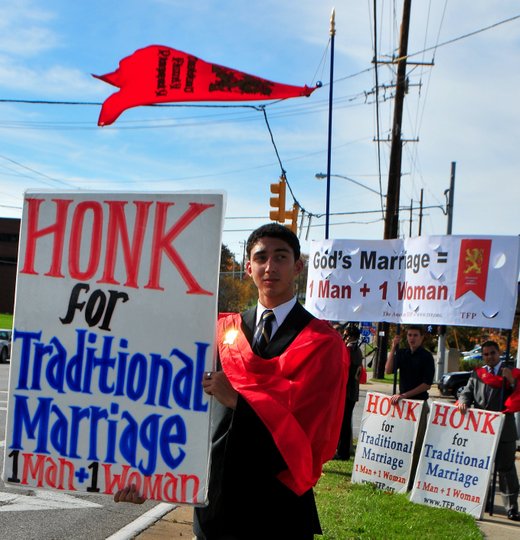 The imprisonment of Kim Davis due to her refusal to issue marriage licenses for homosexual couples was the latest and most striking example of religious persecution in America.

When Davis was elected to office, marriage was marriage,  the union of one man and one woman. There is no doubt about what Kentuckians think.  In 2004, seventy-six percent of Kentucky voters pulled the lever in the voting booth to protect marriage as a sacred institution. Seventy-six percent opposed the attempt to destroy true marriage.

The majority of Florence, Kentucky, was audibly favorable to the message of "Honk for traditional marriage" which was written in large letters on the signs of the pro-marriage volunteers. The city of Florence, near Covington, is home to the gorgeous neo-gothic Cathedral of Our Lady of the Assumption. Full of beautiful stained glass windows, it is an excellent place to pray, which TFP Student Action members took full advantage of, because action without prayer is fruitless.

In Frankfort the public was more outspoken. A big man in his early thirties approached: "I wanna thank you! I'm so happy to see y'all out here, you got bagpipes! Do you have Irish blood? I've got Irish blood! I had to walk over here and shake all your hands. I saw you driving by, but my horn doesn't work, so I just had to park and walk all the way over to shake your hands instead.”

At one intersection we witnessed a young mother shaking her head "no" at the pro-marriage signs, while her 9-year-old boy in the passenger seat was nodding "yes" in agreement. The mother started to "lecture" the boy on the issue and he became confused and visibly unsettled.

At the University of Kentucky in Lexington, several hundred leaflets Ten Reasons Why Same-Sex "Marriage" is Harmful and Should Be Opposed were distributed. Students took them easily, exclaiming “good job,” and “thank you for doing this.”

A young man shook one TFP volunteer's hand and told him, “I wish I could be out here!”

Another student opposed to the peaceful campaign asked how same-sex "marriage" is negatively affecting society.  Response:  Same-sex “marriage” is resulting in the persecution of Christians.  Example:  Sweet Cakes by Melissa where Melissa Klein was fined $130,000.00, lost her business, and received death threats for refusing to make a wedding cake for a homosexual "wedding."  He cynically responded, “so you are worried about persecution because someone was forced to bake a cake?” The student made light of the fact that Melissa was harassed, lost her livelihood, was fined, and virtually reduced to a state of isolation. His attitude serves as an eye-opener as to how the Left and the homosexual movement make light of the persecution and imprisonment of Christians – just remember Kim. 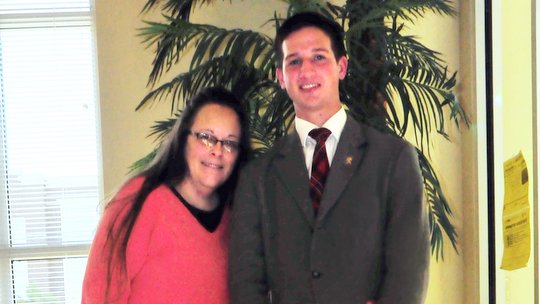 While campaigning in Morehead, Kentucky, where Mrs. Davis works as a county clerk, there were moments when pro-marriage was so, so loud that our volunteers could not hear themselves talk.  Cars and trucks honked to express approval for true marriage. Thumbs up, smiles and waves, words of thanks and support were overwhelming. Two volunteers were able to greet and encourage Kim Davis at the courthouse.  She autographed a copy of our “10 Reasons” flyer and one volunteer played Amazing Grace and Immaculate Mary for her on the bagpipes.

When going for lunch after a heated campaign at the University of Louisville, the caravan members happened to see ladies praying the rosary in front of a building with 40 Days for Life signs calling for an end to abortion.  The Women’s Surgical Center of Louisville is a house of horrors, the only abortion mill in Kentucky.  TFP members joined them for the rosary. After the rosary, one of the ladies was really grateful:  “I needed to see this," she said. "I work a lot and am involved in more activities than I can handle. But seeing this gives me hope.” Another elderly lady chimed in, “Of course there is hope! Seeing 8 young men standing out here, praying the rosary and singing [hymns to Our Lady] gives me a lot of hope.”

A young man arrived while the caravan members were preparing to leave. He was scheduled to pray in front of the abortion mill. Curious as to who the large group was he asked one TFP member what group he represented. After being given the name of the American TFP, he wondered if the group wrote books. “Do you know a book called Return to Order?” “That’s us!” the TFP member replied. “I am reading Return to Order!” the young man said. He explained that he was studying economy as his major with a minor in sociology. “It is right up my alley!”

Realizing the seriousness of current events all over the world, some may be tempted to discouragement. Despite the moral depravity that seems to be increasing, in the end, nothing is greater than God when sought through His Blessed Mother. As Prof. Plinio Correa de Oliveira said: "Are things hard? Yes... Are there sufficient graces? Yes... Is the undertaking good? Yes... Then, COURAGE!"