Visit to the State Capitol

On Saint Patrick's Day, under a magnificent blue sky, we set up in front of the Rhode Island State House. The banner and traditional marriage signs looked great with the imposing capitol in the background. Although the traffic was a bit slow, people working in the surrounding state buildings looked curiously from their office windows as the sound of TFP bagpipes carried across the esplanade. Many snapped photos of our display or lingered to hear more bagpipe music.

"If they don't lose now, they'll lose later in a referendum," remarked a gentleman at the capitol. "They don't have the votes to pass the same-sex 'marriage' bill." That was good to hear.

"So, Rhode Island might be the next Maryland, where a similar bill against traditional marriage failed," added TFP volunteer Mr. Matthew Shibler.

"No. I don't want your flier," said a woman who refused to take our flier 10 Reasons Why Homosexual "Marriage" is Harmful. "I'm for equal rights, marriage equality." Marriage what? There's only one marriage; God-ordained marriage. Besides, equality under the law is juridical, not biological. It does not and cannot eliminate the anatomical, physiological and psychological differences between the sexes, which create the conditions for marriage and constitute its natural foundation.

After saying grace, a lady approached our table. Delighted with the purpose of our visit to Rhode Island, she said: "I just have to commend you gentlemen for doing this." Proudly pointing to a Cross on her lapel, she continued: "You know where I stand, of course. I support traditional marriage. " She took a TFP flier back to her table and in a few minutes another lady came to chat and encourage us on our crusade.

At the Warwick Mall

The Warwick Mall is an ideal place to reach a lot of people. While defending traditional marriage in 2009, at this same location, a group of TFP volunteers were physically attacked and sprayed with mace by a group of pro-homosexual individuals. This time, we didn't know what to expect, but as soon as we reached the busy intersection, we met hostile sounds from a white car waiting at the light. "Are you serious!?" screamed a woman. "Don't you remember last year? I was arrested!" Apparently, the individual was among those who had attacked our members, prompting a police investigation which led to the arrest of four pro-homosexual people. 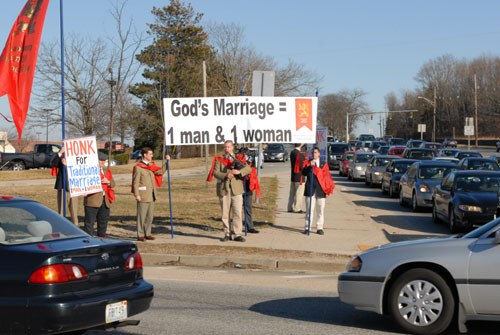 The white car pulled away emitting loud yells. As it cleared the intersection a police car followed closely behind and we never saw them again. Meanwhile, the honks for traditional marriage increased in volume and intensity. There's nothing quite like the combined sound of honking, bagpipes, prayers, shouts of joy, and unfortunately, cursing, all merging together at the same time. That's the unusual earful you get on campaign. 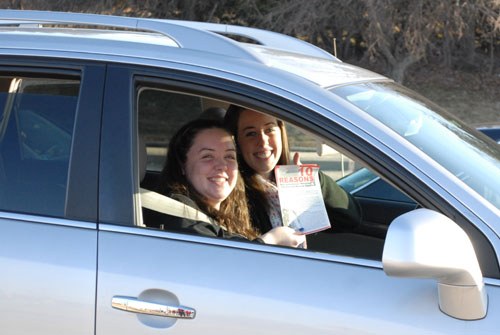 "I want to get my picture taken by your banner," said a young lady as she gave her camera to one of our volunteers. "I support what you're doing!" Moments later, a teenage boy came running over, gave our bagpiper Mr. James Slobodnik a high five, saying "good boys!" then skipped back to join his family in the parking lot.

I should also mention that a cup of Dunkin Donuts coffee was also hurled at us from a passing car, but it fell short and did not hit anyone, thank God.

Please continue to pray for this endeavor and the victory of traditional marriage in the state of Rhode Island. Your prayer and support are most appreciated. Until next report, may God bless you.