After Mass we met a gentleman who kindly offered to lead us to one of the busiest intersections in Utica, near Sangertown Square, for our next campaign.  He was glad to meet our team of young volunteers and said: “I’m so impressed.  Where have you been all my life?”

At this location a woman stopped, got out of her car and said: “It’s about time somebody stands up for God in this country.”  At this location, shopgoers peered out of nearby establishments to see what the cause of so much honking might be on an otherwise calm Sunday afternoon.  Many just smiled after seeing our “honk for traditional marriage” posters.

“I’d like to call you fanatics,” remarked one passerby, “but I can’t do that because I see on your faces that you are convinced of what you believe and you are committed.”

Unfortunately, the language used by those who oppose God-ordained marriage can be very offensive.  During this campaign, a driver at the light let out a particularly immoral string of insulting profanities.  One of my TFP colleagues had the brilliant idea of responding with a simple prayer to Our Lady:  “Virgin Most Pure,” he said aloud, and everyone nearby responded, “Pray for us!”   Instantly, the woman yelling insults went silent, completely silent, as if an invisible switch had been turned off.

“We were just discussing this very topic in the car and then saw you,” said a gentleman offering a friendly handshake.  “It’s frightening to think where our country is going.”  Two more acquaintances joined him on the sidewalk as they took in the sight and sound of the TFP campaign.   They smiled at the growing chorus of honking vehicles.  Then, a woman suddenly approached them:  “Don’t tell me you support them (TFP) – do you?”  Without hesitation, they replied with an emphatic “Yes!”   She had hoped to find others who would agree with her pro-homosexual stance, but her attempt failed.  Demoralized, the woman returned to her car where she remained for a good half hour, debating with TFP volunteer John Miller, who reiterated Catholic teaching.  Every time I turned around, the woman -- who claimed to be Catholic -- was holding her forehead with both hands in disbelief.  Every additional honk for traditional marriage only increased her anxiety until she said, “I’m getting sick.”

Even on lunch breaks, people recognize us.  Today at Panera Bread, for example, a man passed by our table and said: “I didn’t honk at the intersection, but I wanted to.”

On Monday, we campaigned in downtown Rome, near Fort Stanwix.  The support was so great that is was difficult to find anyone who did not agree with our message.  In upstate New York, Rome is the city that displayed the most support for traditional marriage. Here, we witnessed non-stop honking, thumbs up, double thumbs up, applause, cheers, you name it.  A lone protester showed up and deposited a crude, obscene sign at the intersection.  It turned out that she was from Florida, not Rome.

When a Denny’s worker saw the sign on his establishment’s corner, he quickly deposited it in the nearest dumpster.

Until next report, keep the prayers coming. 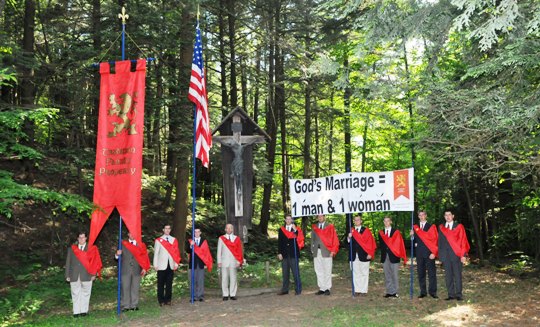 Visit to the Shrine of Our Lady of Martyrs, Auriesville, NY: At this site, Jesuit missionary Saint Rene Goupil was martryed for the Faith. Here we prayed a rosary for the victory of traditional marriage in the Empire State.
Most Popular
Related Links