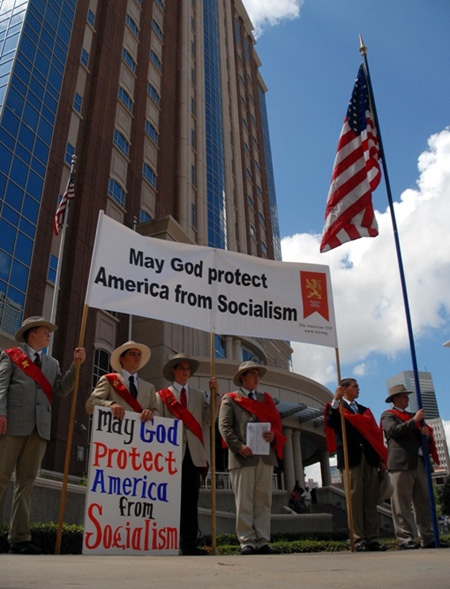 Although Houston is a large sprawling city, the streets downtown are fairly empty. However, after scanning the city for pedestrian traffic we found a broad mix of people, from lawyers to construction workers, near the courthouse and that is where the first campaign of the day started.

Texans tend to be decisive. "Let me see what you got!" said one gentleman as he stopped his car in the middle of the street, removed his seat belt and left the vehicle to pick up one of our fliers, 10 Reasons to Reject Socialism.

"Right on!" said another visibly pleased with the campaign. 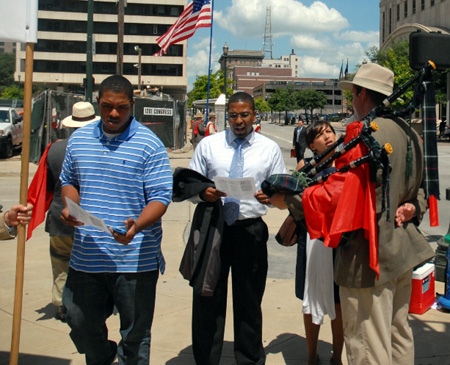 "So, tell me, what do you find so objectionable about socialism," asked a woman sporting rather short hair, holding a thin folder and a copy of the TFP flier. "There are many reasons to oppose socialism," I replied. "Stealing from the rich to give to the poor is not right. Not only is it wrong to steal, but wherever socialism and communism are implemented the poor only become poorer. Just look at countries like Cuba, where egalitarian ideology rules and private property is destroyed." As soon as I mentioned egalitarianism, the woman jolted as if she had received an electric shock.

"You're against egalitarianism?!" she said in absolute astonishment. "I'm a Catholic social worker, and I have had first hand experience of how white males are abusive and violent and have too much power," she said. I quickly realized that I was talking to a real leftist Catholic. "The fact that men sometimes act as they shouldn't does not mean manhood is bad, it just means that morality in society is eroding," I responded. " Besides, doing away with the role of men in society to avoid cases of abuse would be similar to doing away with food to avoid cases of obesity," I added.

Next, she asked: "Do you think men and woman are equal?" "No," I responded. "Just consider the demands of serving in the Special Forces, an all male force. In fact, the idea of radical equality is what judge Walker in California is using to deny natural law and claim that one man, one woman marriage is unconstitutional." At this point, the egalitarian woman's facial muscles began quivering with anger and she walked away. 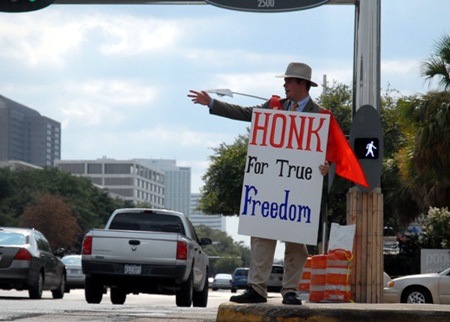 In the afternoon, we campaigned at The Galleria. The massive intersection was busy with vehicle traffic and our banners and signs were visible to thousands of people. Many cars honked their horns in support.

After wrapping up for the day with a prayer we walked to the mall for some ice cream, which the younger volunteers of our caravan especially enjoyed. Walking through the mall, we met a lady who was telling her co-workers about the TFP campaign. As we passed, she said. "Oh, these are the men who are against socialism."

All the TFP volunteers are in high spirits, ready to continue campaigning in spite of the hot weather.

f you'd like to support us on this mission, please consider filling our van with a tank of gas. As volunteers, we depend on the generosity of souls who understand the importance of keeping America free from the dangers of socialism.