Last night we enjoyed a delicious meal at the home of a gracious family in Manvel and after a good night's rest, we departed to Austin, the state capitol.

Right after unfurling our banners near the Northcross Mall, the reactions began. "God bless America," one lady said as she drove past, followed by a sinister sort of guttural yell from a different car affirming that "God is dead." These two opposite reactions a few short seconds apart reveal the great division within our nation. There are two distinct Americas: one that is for God and another that is against Him. And it so happens that those who favor socialism often display animosity against God, as we have witnessed. 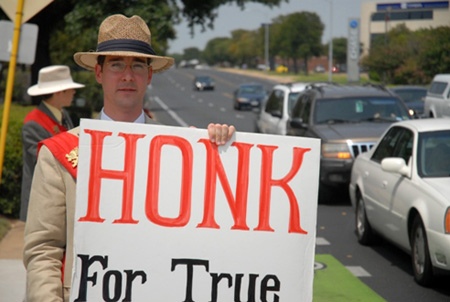 "This is the answer"

"I've been wondering what I can do for our country and this is the answer," said a Texan man bubbling with enthusiasm for the TFP campaign. Unlike other states where we've campaigned before, a good number of Texans who see the campaign are not just content with honking their horns and waving goodbye. They sometimes pull off the road, get out of their cars, and approach to shake our hands and personally encourage us.

"This is the first time I see someone address the real problem: socialism," remarked a gentleman who had pulled off the road for a copy of our flier 10 Reasons to Reject Socialism. "The Tea Party doesn't address it and I want to help you in any way I possibly can." As he gave us his business card, he added: "I'm even willing to hand over my entire paycheck to stop the advance of socialism."

One more car pulled over. This time an older man with graying hair stepped out of his car and into the blazing sun. By the way, the heat index here is at about 104. "Who are you?" he asked. "Tradition, Family and Property," answered one of our caravan members. He took in the scene of our banners waving in the wind, took a flier, paused for a brief moment and said: "Like the Crusades. Keep it up!"

Very few passing vehicles merely honk in response to our signs. Many honk in support, then immediately give us a thumbs up or even two thumbs up. However, I should probably also mention that some people make obscene gestures, but not many. The support is dominant. For example, a man driving a pick up truck slowed down at the intersection and handed us a big package of bottled water. In this heat, water is constantly needed.

At evening Mass we met an energetic Catholic nun who had escaped from Vietnam in the 70s. She kindly gave us a tour of the Church built in honor of the Vietnamese martyrs. At the conclusion of the visit, she inquired where we planned to have dinner and was somewhat surprised with our lack of plans and invited us to a Chinese restaurant, where the younger caravan members tried eating with chopsticks and shied away from tasting squid. But more important than overcoming the fear of squid was the dinner conversation. The good sister told us how she had escaped from communism on a small boat loaded with 150 people. The infants on board were given sleeping pills and stored in fish crates or compartments beneath the deck. Food was scarce and she went three days without anything to eat. If detected by communist Vietnamese agents, everyone on board the 25 foot boat would be arrested, sent to forced labor camps, or just killed. During this harrowing experience everyone on the boat was praying the rosary. She reached Malaysia and finally the United States. She also spoke about the persecution of the Catholic Church in Vietnam, which only underscored the need to oppose socialism in America.

Please continue to pray for us. Our next stop will be in San Antonio.