I am glad to tell you that the American TFP and TFP-Louisiana kicked off a new caravan in Texas. Our tour is taking us to a number of major cities in the Lone Star State with the clear goal of alerting the public about the growing dangers of socialist ideology in America. As many of our friends and supporters expressed interest in following our travels and campaigns, we will be posting daily updates from the front lines. 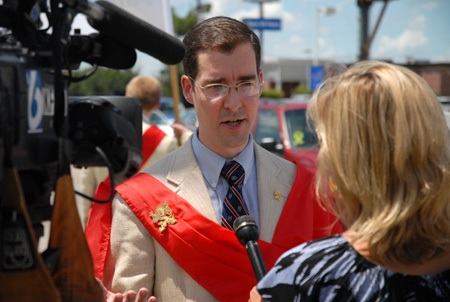 Our first campaign today started at a busy intersection in Beaumont. It was in the 90s, and for those of us who are not accustomed to Texas weather, the sizzling hot sun and elevated temperatures posed an added challenge. By the end of the day we all had hats to protect ourselves from the blazing sun. Now I know why cowboys use those characteristic hats.

A lady paused at the intersection, rolled down her car window and said: "I am happy to see you out here dressed like that. You represent me and I am proud of you!" One of our volunteers gave her a copy of the TFP flier, 10 Reasons to Reject Socialism, and she drove away very pleased.

The TFP campaign was very visible. We have a large banner and it reads: "May God protect America from socialism." Smaller posters invite passing vehicles to "Honk for true freedom from socialism." So, as you can imagine, what typically happens is this: as soon as the traffic light turns green a symphonic erruption of honking horns begins. Then there is our bagpiper playing patriotic music which attracts yet further attention. That explains why a news crew with Channel 6 that happened to be driving by pulled over and filmed the campaign. I'm pretty sure they showed a segment of our campaign on the 5 or 6 oclock news.

"Thank you for doing this," said a passerby. "It's about time someone does something about socialism instead of just talking about it."
Lots of people people driving by honked with broad smiles on their faces. TFP member Charles Sulzen described the support we received today very well. He put it this way: "They see the campaign and smile like children in an ice cream shop."

I should mention that some new volunteers in their teen years have joined us from Arkansas, Louisiana and Texas. After hearing about the TFP caravans at one of the Call to Chivalry summer camps, they asked to particpate. It is their first caravan and they are doing very well.

Several families here have gone out of their way to assist us during our travels. For example, a delicious lunch and dinner were provided for us at a local Catholic Church hall. During dinner a group of Knights of Columbus gathered to hear more about the TFP campaign.

Tomorrow, we will push on to Houston.
Until then, please continue to pray for us as.
Thank you for your prayers and support.