I am writing from San Antonio, a charming city named after Saint Anthony of Padua. This region is blessed with a rich Catholic heritage harking back to the days when Franciscan missionaries arrived from Spain in 1691. In fact, the original missions still stand and are well worth visiting.

Today, we took a stand against socialism right in front of the Alamo. It was a symbolic place to be and many Texans visiting the historic site understood the significance of the TFP campaign in the context of the current culture war for moral values waged not with muskets and cannons, but on the battlefield of ideas. Our large banner faced the facade of the Alamo while TFP volunteers shared fliers with pedestrians on the sidewalks. Some people walked by clapping with joy, and many more paused to take photos or pose for a picture under it. At one point there was a line of digital cameras clicking away. It seemed like more people wanted snap shots of our banner opposing socialism than of the Alamo itself.

"What you're doing is very important. Good luck with your crusade, fellows," said a reenactor at the Alamo manning a display of period muskets, swords and Bowie knifes.

The sidewalks teamed with visitors and tourists. "Thank you!" said a visitor of Cuban descent, "You don't need to tell me how bad socialism is. I know all about it." Two men from Spain approached Mr. Thomas Schneider to thank him for taking a stand against socialism. "We're from Spain and we know what socialism is."

Since the title of our flier is "10 Reasons to Reject Socialism," you commonly hear people say, "There is a lot more than ten!" 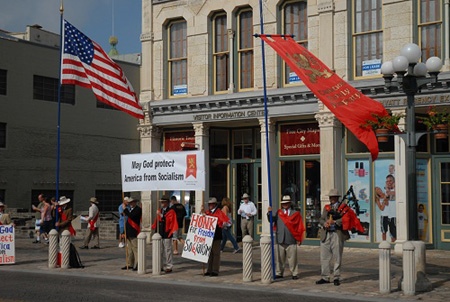 A couple on vacation nonchalantly took one of the TFP fliers and walked away, but later returned with a question: "How does socialism harm traditional marriage?" Mr. Cesar Franco kindly explained how socialism does not see marriage as a life long union between a man and a woman. Socialism also harms the family by targeting private property, which Marx and Engels consider the foundation of traditional marriage. The woman was visibly unnerved by the answer, especially the reference to one man, one woman marriage and what started as a simple conversation turned into a full blown debate. "How does gay marriage hurt your marriage?!" she demanded over and over again like a broken record that shrieked almost louder than bagpipes. 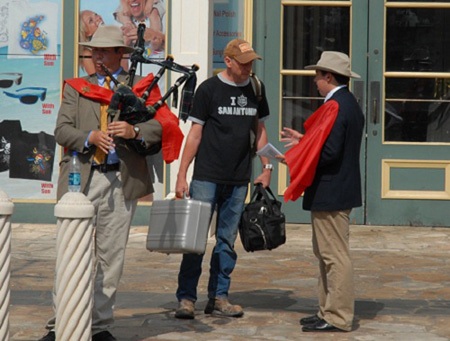 First off, Mr. Franco explained what marriage is, and how the homosexual movement's push to redefine marriage is a blow to the social order, God's Law and natural law. Besides, another TFP member chimed in, "homosexual behavior is largely responsible for the spreading of AIDS, which hurts plenty of people." Here, the man jumped in. "AIDS used to be a problem," he said, "but not any more." The more we tried to calmly reason with them, the more vociferous they became. Before walking away, they even accused the Church for its moral teaching.

Overall, we had a great day.

Please keep praying for us.