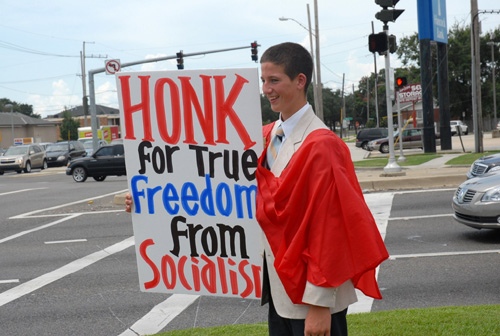 On November 9 fourteen volunteers with TFP Student Action traveled to the University of Delaware to distribute educational material about the dangers of socialism.  The young TFP members gave out more than 1,500 fliers to students on campus.

While four of the volunteers played the bagpipes, a professor thanked Evan Olwell for doing the campaign: “I teach Spanish here at UD," she said.  "Being from Cuba, I totally understand the importance of what you’re doing. Unfortunately, many college kids don’t really know what socialism is, nor how bad it is. We can’t let this happen in America! Thank you!”

There was really no articulate opposition, aside from a few angry students – three of whom ripped up fliers titled 10 Reasons to Reject Socialism. One grumbled angrily, “I like Socialism – you guys don’t know what you’re talking about!”  When a TFP volunteer pointed out that he would benefit from reading the flier first before tearing it up, he stormed away unwilling to debate the issue seriously.

During our lunch break, Juan Leyva spotted a Marine Corps officer in uniform standing in line for lunch.  Since the “10 Reasons” flier against socialism has an ad for a free copy of An American Knight, the biography of Col. John Ripley (USMC) by Norman Fulkerson.  Juan thought it appropriate to thank the Marine for his service – as well as ask if he knew about Col. Ripley.  “Colonel Ripley?" replied the Marine, "why yes, he was America's last knight."

Juan then handed him the TFP flier and explained the campaign against socialism, and how Colonel Ripley was indeed a American knight. Juan was surprised because the Marine did not know about the book An American Knight, but nevertheless used the term "knight" when referring to Col. Ripley, a true hero who fought against communism in Vietnam.

May God protect America from the snares of socialism.