On their latest campaign stop for moral values at Penn State University on April 6, TFP Student Action volunteers collected petitions to Pope Francis.  Many students on the College Park campus located in central Pennsylvania gladly added their names to the worldwide petition in defense of true marriage and family, which is nearing the 200,000 mark. 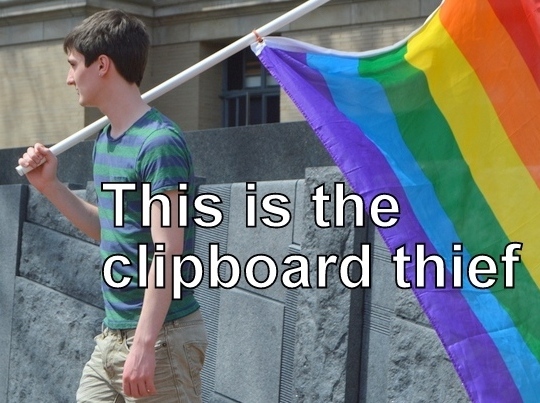 However, soon after the petition drive was underway, a group of pro-homosexual activists waving large and small rainbow flags appeared to disrupt TFP's peaceful exercise of free speech.   Visibly upset by the number of students signing the TFP petition, they formed a counter-demonstration and pestered anyone who signed the pro-family petition to Pope Francis: "Don't sign it! They're bigots!"

After realizing that their insults were going nowhere, one of the pro-homosexual students -- holding a large rainbow flag -- feigned interest and asked to see and read the petition.  Suddenly, he grabbed the TFP clipboard and ran off at top speed, stealing a number of signatures.   He vanished and never returned the stolen clipboard.

Then, in an attempt to counter the TFP petition, pro-homosexual advocates began asking for signatures to "end bigotry."  Interestingly enough, few signed and some verbally showed disagreement.  As one pro-homosexual activists asked for signatures, a student loudly replied, “Absolutely not!”

But for the remainder of the campaign, each TFP volunteer was followed, pestered and taunted.  Whenever students approached to sign the petition to Pope Francis, one of the rainbow flag-carrying individuals would yell, “Don’t sign that! They’re bigots!”

Watching the scene from the entrance of the student center, a young business owner paused to express his growing concern.  "The homosexual movement doesn't really want marriage; they want to persecute Christianity," he said. "The persecution against Christian business owners already started and it's going to get worse.  A lot worse.  I run an insurance company and we had to cut out family insurance altogether to avoid being forced to support same-sex unions.” Lamenting the state of higher education, he added: "My children will not be going to college."

While marriage was the primary topic of debate, support for abortion among the pro-homosexual group surfaced.  "Of course I'm for abortion!” said one student, "it's only a person after it starts breathing."

After signing the petition to Pope Francis and saying goodbye to several TFP volunteers, one lady retraced her steps.  "You [TFP] are polite, well-dressed and well-mannered.   And they [rainbow crowd] are dressed like that, shabby and yelling.  It's so easy to tell which side you're on -- the pro-family side.  Thank you so much!"

Clipboards can be replaced.  Insults are inconsequential.  But the sacred institution of marriage and family are irreplaceable and will forever be the taproot of true society.  Let us therefore pray and fight to preserve and protect them against the advance of the homosexual revolution.

Ask Pope Francis to Save the Family 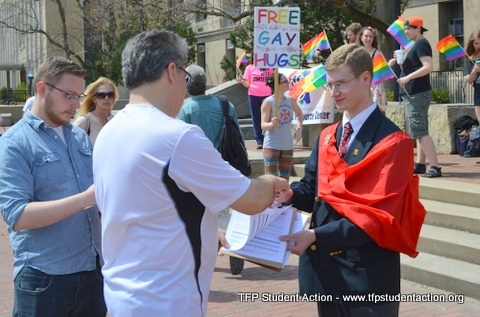 Click here to add your voice to the 187,000-strong worldwide petition to Pope Francis for the protection of marriage and family at the upcoming October Synod in Rome.

Please ask your family and friends to sign it too.