Blessed with success in Maryland, TFP Student Action volunteers are now defending traditional marriage in a new battleground state: Rhode Island.  In this state, which is 63% Catholic, you would think that a bill to legalize same-sex counterfeit "marriage" would be unthinkable.  However, the moral crisis continues to harm the integrity of the family even in Catholic areas.

Heavy rain kept us indoors this morning.  Only in the afternoon, under a slight drizzle, did we finally get a chance to test the waters.

The mere mention of traditional marriage infuriates some people.  As we walked to the location of our campaign, for example, a man walking up the road caught a partial glimpse of one our signs. That alone was enough to send him into a prolonged and hostile rant.

Our downtown location was a visible one and the outpouring of both support and opposition was immediate:  Car after car honked for traditional marriage, followed by some who made obscene gestures.  Toward the end of the campaign, a few young pro-homosexual counter-protesters arrived with large, offensive signs, reading: "F*** these guys." Their presence did not stop the campaign.  We only continued praying and proclaiming the truth of God's ordained marriage of one man and one woman.

A good number of people paused to take pictures of the campaign. 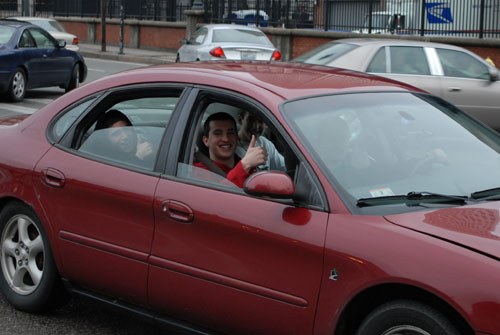 We are so grateful to everyone who stepped forward to help this crusade for traditional marriage.  Your prayers and support, especially the gas money, is allowing us to continue this endeavor.  Every member of the caravan is grateful to your for your help.  Until next report, God bless you.

Saint Joseph, pray for us!