One of America's finest men, Admiral Jeremiah A. Denton, Jr., US Navy (Ret) was laid to rest on July 22, 2014 at Arlington National Cemetery.  His noble, courageous and patriotic conduct under extreme torture as a POW in Vietnam continues to inspire a nation that is grateful to God for having given America such a hero.  As a U.S. Senator, staunch anti-communist, and faithful Catholic, he firmly opposed abortion and stood up for traditional moral values and defended the cornerstone of society: the family. 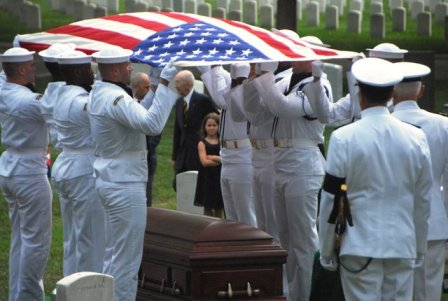 The program distributed at Admiral Denton's moving and ceremonious funeral explains how his A-6 Intruder was shot down while leading a bombing raid over North Vietnam in July of 1965.

"He was held captive for seven years, seven months in Hanoi during which time he endured repeated and prolonged torture, as well as solitary confinement for four years -- two of which were spent in the notorious Alcatraz camp.  Jerry has been widely praised for his leadership role by his fellow POWs, a role that was defined by his resilient defiance of his Vietnamese hosts' ongoing efforts to divide, subjugate, and dishonor the American prisoners and use them for propaganda purposes."

For example, in a televised interview staged by his captors in 1966, Jerry was asked what he thought of the US military's bombing campaign.  Much to the disappointment of his captors, he replied, 'I don't know what is happening (in the war), but whatever the position of my government is, I support it -- fully!  Whatever the position of my government is, I believe in it.'  He was beaten and tortured relentlessly for this heroism.  Beyond this raw display of courage, throughout the interview, remarkably, Jerry also had the presence of mind to blink the work 'TORTURE' repeatedly, in Morse code, covertly confirming to the U.S. government for the first time that American POWs were being tortured."

Upon Jerry's release at the end of the war in February 1973, he spoke briefly on the tarmac when he stepped off the plane onto free soil.  Speaking on behalf of his comrades, some of whom honor Jerry with their presence today, he said:  'We are honored to have had the opportunity to serve our country under difficult circumstances.  We are profoundly grateful to our Commander-in-Chief and to our nation for this day.'  He concluded this understatement spontaneously with, 'God Bless America' -- a lost phrase at the time.  These crisp words and the image of his sharp salute to the American flag, which was broadcast live across the country, served to momentarily rehabilitate and exhilarate a war-weary and divided America."

For his extraordinary service and leadership, the US Navy awarded Admiral Denton its highest medal, the Navy Cross.

May God continue to bless America and send us, at this time of great cultural upheaval, heroes and leaders cut from the same cloth as Admiral Denton.

To learn more about Admiral Denton's story, read his book, When Hell Was in Session. 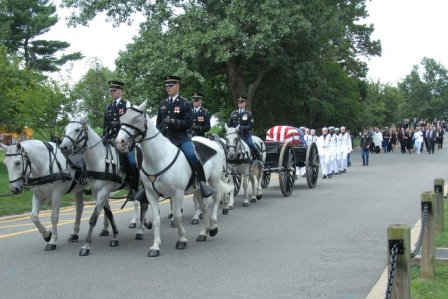