The campaign in Binghampton, New York, yesterday had an interesting twist. As we raised the American flag to begin our efforts in favor of traditional marriage, a group of people standing on the opposite side of the street – in front of City Hall – were about to do the same.

However, they were not raising old glory. Instead they were hoisting the very symbol of the opposition: a rainbow flag, with the approval of city mayor Matthew Ryan.

Those in attendance could not help notice that the rainbow flag -- an internationally recognized symbol of a group whose members openly promote unnatural vice -- was in a visibly higher position to that of the American flag. Besides being in direct conflict to flag etiquette, which clearly states that no “flag or pennant may be placed above the [American] flag,”1 It was also a message to the citizens of Binghamton that the homosexual movement has conquered their city.

In a peaceful act of reparation organized by the Franciscan Friars of the Immaculate, faithful Catholics pray the rosary on the opposite side of the street, under the gaze of a statue of Our Lady Fatima.

The declaration of victory which this gesture represented was clearly premature. It was virtually impossible for Mayor Ryan and those gathered around City Hall to ignore what was happening across the street.  While Father Johannes Smith and other members of the Franciscan Friars of the Immaculate from nearby Endicott led the faithful in the recitation of the rosary, TFP members solicited support from the public with "Honk for Traditional Marriage" signs. The steady horn blowing which sometimes reached near deafening peaks drowned out the cheers coming from City Hall. 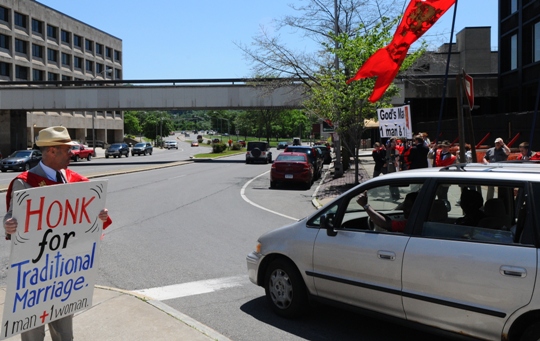 TFP volunteers hold banners and signs inviting vehicle traffic to honk for God-ordained marriage. This driver is giving an anthusiastic thumbs up.

“The local Catholic population was grateful for your additional support,” said Sharon from nearby Endicott. Her son Bob described the presence of TFP members as “wonderful” and quickly added that the spectacle on the opposite side was a “disgrace.”

A TFP member mingled among the pro-homosexual proponents and was shocked with what he heard. One lady, when asked at what age they should start teaching children about such things as homosexuality, responded, “as early as possible.”

Get rid of marriage altogether?

A young man dressed in drag said he was personally “in favor of getting rid of marriage all together. I don’t believe it has anything to do with the state,” he continued, “but as long as it does exist there should be equality.”

An openly homosexual man displayed a pink triangle tattoo on his forearm. He explained how it was a symbol that went back to Nazi Germany. “The story”, he explained, “was that Hitler used to tattoo the [homosexual] men with a pink triangle, a very crude one. When I first heard about it, I thought it was awesome.”

TFP volunteers will be promoting God’s marriage in Syracuse tomorrow.  Please pray for their efforts in the Empire State.