With great faith and devotion, hundreds of thousands of Catholics gathered at over 14,108 different locations across the country on October 10 to pray the Rosary in public and beg God and the Blessed Mother to save America.  Simultaneously at noon that Saturday, more than 14,000 Rosary Rally captains went into the public square with friends and family to beseech God for special graces of conversion for our beloved nation.

Within one hour, approximately 31,500,000 Hail Marys rose up to Heaven on city streets across America.  From coast to coast, these Public Square Rosary Rallies -- sponsored by the American TFP and its America Needs Fatima campaign -- highlight the importance of the Blessed Mother's call to conversion at Fatima, Portugal, in 1917.

TFP Student Action volunteers attended the high-profile Rosary Rally in front of Rockefeller Center in Manhattan, New York.  In the majestic shadow of the newly restored Saint Patrick's Cathedral on Fifth Avenue, the din of traffic was temporarily subdued by the calm recitation of the rosary, punctuated at intervals by Marian hymns executed by the youthful TFP bagpipe, brass and drum corps.

Hail Holy Queen Enthroned Above and Immaculate Mary and other hymns echoed off the surrounding skyscrapers making the sight impossible to miss.

The rally in Manhattan began when a statue of Our Lady of Fatima, escorted by TFP volunteers in ceremonial habit, processed up the sidewalk to her place of honor.  Hundreds of bystanders temporarily froze on the busy sidewalk to capture the moment on their cell phones.  Some even joined the rally. 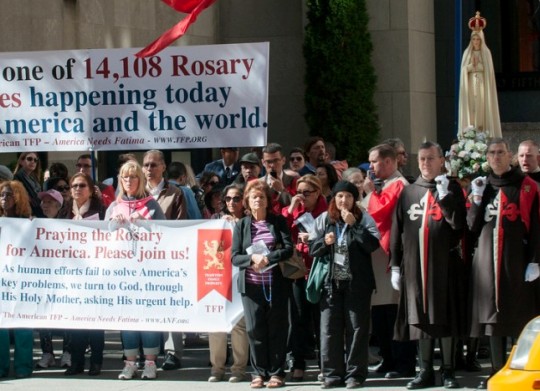 After a solid hour of prayer at Rockefeller Center, TFP volunteers marched some twenty blocks to the Planned Parenthood Federation of America building located on West 33rd Street to pray for the end of abortion.  Here more prayers were recited and "reparation, reparation, reparation" was chanted by those gathered as a way to console the Sacred Hearts of Jesus and Mary for the grave sins of abortion and homosexual "marriage" in our land.  Taking notice of the prayer rally at their doorstep, Planned Parenthood employees exited their building and paced to and fro with agitation, snapping photos of the peaceful protest.  Reactions from pedestrians varied greatly:  some mumbled insults, others expressed approval.

Another 290 pro-life rallies were held at other Planned Parenthood facilities nationwide in all 50 states across the country calling for the end of federal funding to the mega abortion provider.

"Without God, we can't expect to find lasting solutions that will be able to reverse our culture's moral decline," said Francis Slobodnik, national coordinator of the 2015 Public Square Rosary Crusade.

"We can't allow the sins of abortion and unnatural same-sex 'marriage' to disfigure the moral fabric of society and family," Slobodnik said. "To be a nation truly blessed by God we must fall on our knees, pray, do penance and amend our ways.  In the measure that we turn to the Mother of God and do what she requested at Fatima, we will find true hope and courage to turn things around."

Praying in public is a sign of hope and becoming more popular.  Inspired by the annual prayer rallies in America, faithful in faraway Saipan reported having 10 rallies of their own this year.  Canada reported having 125, and the tally from South Africa reached a total of 260 rallies.

As the world spirals deeper into chaos and confusion, our readers are invited to join Saint Bernard, Doctor of the Church, in his moving prayer:

"All of you, who see yourselves amid the tides of the world, tossed by storms and tempests rather than walking on the land, do not turn your eyes away from this shining star, unless you want to be overwhelmed by the hurricane. If temptation storms, or you fall upon the rocks of tribulation, look to the star: Call upon Mary! If you are tossed by the waves of pride or ambition, detraction or envy, look to the star, call upon Mary.

If anger or avarice or the desires of the flesh dash against the ship of your soul, turn your eyes to Mary. If troubled by the enormity of your crimes, ashamed of your guilty conscience, terrified by dread of the judgment, you begin to sink into the gulf of sadness or the abyss of despair, think of Mary. In dangers, in anguish, in doubt, think of Mary, call upon Mary.

Let her name be ever on your lips, ever in your heart; and the better to obtain the help of her prayers, imitate the example of her life:  "Following her, thou strayest not; invoking her, thou despairest not; thinking of her, thou wanderest not; upheld by her, thou fallest not; shielded by her, thou fearest not; guided by her, thou growest not weary; favored by her, thou reachest the goal. And thus dost thou experience in thyself how good is that saying: 'And the Virgin's name was Mary.'"

Our Lady of Fatima, pray for us!