Early this morning, we made our way to one of the largest Planned Parenthood abortion facilities in the country to defend innocent life.  The newly opened mega-center sits right off of I-45 in Houston and conducts daily abortions, including late-term abortions. Planned Parenthood of Houston reported performing 8,273 abortions in 2009 alone.

The first country to legalize abortion was communist Russia in 1920.  As we reflected on the "errors of Russia" mentioned by Our Lady of Fatima and how the Culture of Death has spread so much since then, we pulled out our rosaries and peacefully prayed the Joyful Mysteries, specifically for the end of abortion at the gates of this mega Planned Parenthood center. Mr. Charles Sulzen played a few tunes on his bagpipes between rosaries and sang "We Want God" composed by St. Louis de Montfort and other hymns. 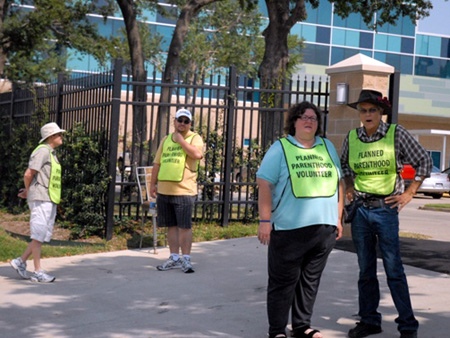 Cars intermittently pulled into the abortion facility, yet, rather surprisingly, most drivers paused to receive pro-life literature from local pro-life volunteers who faithfully provide counseling to those who will listen. Sometimes, their efforts succeed and lives are saved.

Prayer combined with the distribution of pro-life literature, however, did not go unnoticed. Soon pro-abortion volunteers showed up wearing yellow vests with "Planned Parenthood Volunteer" on them. One of these pro-abortion men we learned had been arrested for assaulting a two-year-old boy, pushing him to the ground, and deliberately stepping on the legs of people who knelt in prayer on the public sidewalk. His wrinkled face looked hardened, perhaps a reflection of his determination to collaborate with the death of unborn children.

We had the pleasant opportunity to meet Mrs. Christine Melchor, executive director of the Houston Coalition for Life and hear about her peaceful efforts to oppose abortion.  However, our conversation was rudely interrupted.  When a TFP volunteer stepped a few inches onto Planned Parenthood's side of the sidewalk,  the abortion deathscort immediately rushed over and screamed at him using obscene language.  There's not too much you can say to someone in this state so we decided to say a prayer for his conversion. 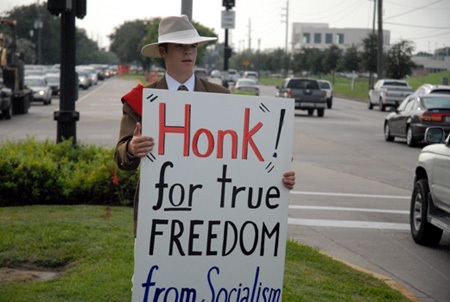 In the afternoon we had a wonderful campaign at a well-trafficked intersection in Sugarland, a suburb of Houston, and the number of honks against socialism reached an all time high.
A businessman leaving Wells Fargo Bank asked: "How is it going?" Mr. Charles Sulzen told him it was going very well. The steady sound of honking horns made that point clear enough.  "I love it," the man said, "and I hate socialism."

Another lady pulled over.  She wanted to get her picture taken with our signs. Shortly after, one lady approached saying, "God bless you for being out here.  I got two calls from people telling me that I had to come out and see you. Thank you so much." She wanted to greet each TFP volunteer. "You're really doing a good job!"
So far, Our Lady has blessed our caravan with abundant graces.  Please continue to pray for us.  And if you wish to participate, please consider sponsoring a tank of gas.  Your contribution will keep us on the road.

May God bless and reward you and protect America from socialism. 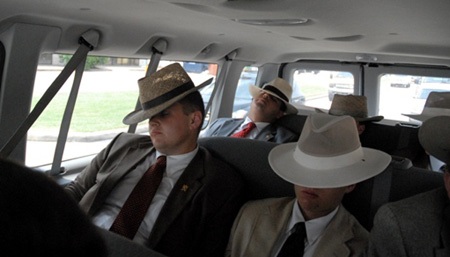