When abortion activist Nancy Keenan, president of NARAL, saw last year’s March for Life in Washington, D.C. she was utterly astounded: “I just thought, my gosh, they are so young,” she told Newsweek. “There are so many of them, and they are so young.”

Abortion advocates like Keenan must be uneasy with the "so-many-so-young" trend.  However, as leaders of the pro-abortion movement get older and focus on retirement, the pro-life movement is ever more youthful, numerous and vibrant.  And nowhere is the resilience and vitality of the pro-life movement more apparent than at the annual March for Life, where hundreds of thousands of Americans stand against the slaughter of the unborn.

On Monday morning, January 24, busload after busload of pro-lifers rolled into the Capitol eager to peacefully oppose abortion and roll back the culture of death.  Bishops, priests and religious were also there as parishes and schools came to protest the slaughter of the innocents.

As the march proceeded up Constitution Ave., its sheer size was massive.  The crowd – estimated at 300,000 – filled the width of the avenue from side to side and stretched into the horizon as far as the eye could see.  What a sight.

Why don’t the major media networks give this any real attention?  The reason is simple:  Like a barometer, the march indicates that the pro-life movement is alive and well.  The liberal media would rather ignore this fact.

But marchers brave the cold not for media attention but to make reparation before the throne of God for the sin of abortion. Many recite the rosary.  Banners and signs fill the esplanade.  The event, so ably organized by March for Life president Nellie Gray, also brings together a veritable who’s who in pro-life America with cardinals and bishops, senators and congressmen.

Tradition Family Property Student Action volunteers were present together with a large contingent of over 120 members, supporters and friends, who carried banners and eighteen-foot TFP standards and distributed this year’s TFP statement: “Ten More Good Reasons to Fight Against Abortion.”

A TFP honor guard wearing the TFP ceremonial habit escorted the pilgrim statue of Our Lady of Fatima. The student body of St. Louis de Montfort Academy of Herndon, Penn. was also present, and The American TFP was pleased to receive contingents from organizations in Italy (Voglio Vivere), Germany (SOS Leben), and France (Droit de Naitre).

As in past marches, the TFP’s Holy Choirs of Angels marching band played a selection of patriotic hymns and American marches. The ensemble included brass, fifes, drums and bagpipes, which were greatly appreciated by the passing crowds. 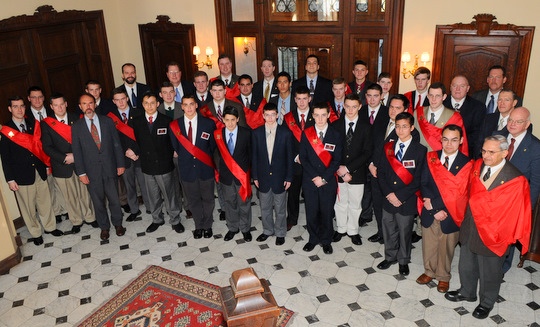 Students from all parts of the country gathered for a lively weekend of study, Catholic camaradarie and pro-life action.

Before the march, students gathered at the TFP headquarters for a two-day conference on the leadership role of Catholic men.  The seminar was honored by the presence of Prince Bertrand of Orleans-Braganza, a direct descendant of two crusader kings, St. Louis IX of France and St. Ferdinand III of Castile.

A line-up of informative lectures sparked lively study circles and thought-provoking discussion.  “I really learned a lot during Mr. Gustavo Solimeo’s talk on the Dictatorship of Equality,” said Joseph Jordan, age 17.  “My generation is facing very challenging times, but after this conference, I feel well prepared to meet the challenge and fight the good fight.”

The March for Life in Washington is the largest of many similar events held nationwide to protest the tragic anniversary of Roe v. Wade.  For the seventh consecutive year, the Walk for Life in California has been gaining momentum.  An estimated 45,000 participants attended this year.

While many TFP Supporters, led by TFP member Philip Calder, joined this West Coast rally, for the first time, a Louisiana Life March also kicked off in Baton Rouge on January 22, which members of TFP—Louisiana were happy to support. 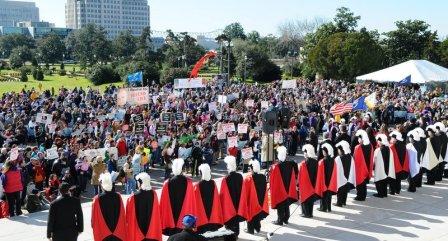 For the last 38 years, the pro-life movement has organized, protested and prayed. It has challenged the pro-abortion movement and put it on the defensive. What is needed now is confident public action to finish the task at hand.

As the TFP 2011 pro-life message states: “With an unshakable confidence and determined insistence, we must continue our peaceful and legal fight against abortion.  It is with certainty of the justice of our cause that we have recourse to Our Lady who at Fatima added a final certainty that these evils will be overcome and we will see the triumph of her Immaculate Heart.”