Upon entering the Hall of Mirrors at Versailles, the first impression is one of vastness. The immense polished floor provides an open arena for the diverse performance of the filtering light. The length and height of the walls are enhanced by the tall, narrow arches. One row of arches opens to the expansive gardens; the other side is inset with mirrors, whose reflections add depth to the perspective. The vaulted ceiling depicts a multitude of mythical characters in abundantly rich colors, which even further accentuates the vastness of the whole.

This first impression is immediately followed by another: that of an admirable, harmonious proportion between the height, width and length of the hall. The same could be said of the decorative features of the wall at the far end: the arch is in perfect proportion to the curvature of the ceiling and to the width and height of the hall; the panels on both sides are exactly proportionate to each other and to the respective walls; the vases could have not been better chosen. The size of the chandelier in the room beyond is perfect when seen through the arch. Similar observations could be made about each of the many decorative features that embellish the hall.

It is as if the same vigorous - almost unyielding - harmony permeated everything; it rules and orders, subjecting all forms, designs and colors to one grand central theme, which reigns and shines in even the smallest details. It is a theme abounding in grandeur, consistency, strength, gracefulness and charm. In other words, it is a faithful image of the temporal order as envisioned by absolutism: a harmonious relationship of all things, established and preserved by the rule of the strong, enlightened, fatherly and always invincible will of the king.

This harmony is not just triumphant, but also festive. This hall was made for glory and pleasure. It bears the mark of a society that thought it had reached perfect stability by making the will of the king its absolute center. And through this stability, they imagined that they had reached material abundance and a perfect earthly well-being.

In fact, this well-being does possess a high spiritual tone. All the pleasures offered by this hall are primarily intended for the delight of the soul, touching, stirring and nourishing its most noble aspects. It is a dignifying environment that makes man feel like what he really is: the king of nature.

Earthly well-being, earthly glory, earthly pleasure and natural order are all reflected in this hall with admirable clarity and skill. Nature was created by God, and it is good and beautiful in itself. The artist and the Catholic thinker must acknowledge this goodness and beauty of the purely natural side of earthly life.

But should he be content with this alone? What about the idea of Original Sin, the struggle between good and evil and the need for penance? What about the notion of death and, beyond death, that of heaven and hell? What about the concept of a redeemer who suffered and died for us amidst an ocean of indescribable sorrow and pain? What about the many lessons in Divine Revelation and the Redemption, so visible and so well expressed in medieval art? In a word, what about the Cross of Our Lord Jesus Christ?

One may find many admirable spiritual values in this environment -but they are the very values that inspired the revolution of 1789. The stamp of pagan thought conspicuously overshadows the mark of Holy Baptism when compared with the Gothic style. 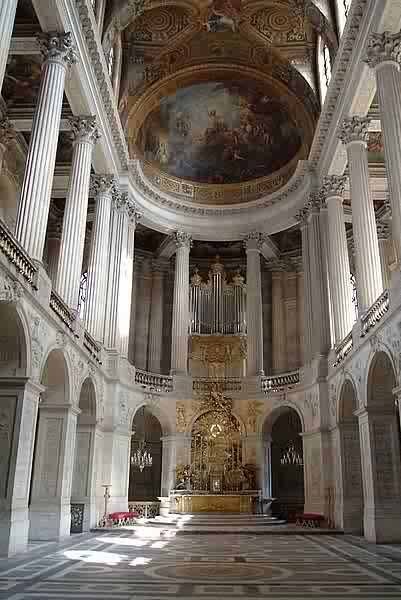 Those who danced in the Hall of Mirrors prayed in the chapel of the Palace of Versailles. Couldn't one say that this chapel is an extension of or a complement to the hall? The paintings in the chapel have a religious theme, but the stances, gestures and expressions of the saints more or less resemble those of the mythological gods in the Hall of Mirrors. The arches and the colonnade have. a pompous, festive air. Everything reflects natural propriety, order and proportion; nothing expresses mysticism (in the good sense of the word, of course) or supernatural fervor. It looks like a chapel for happy, self-sufficient men who desire only a prosperous earthly life and who come here to visit God out of sheer courtesy. Nothing seems capable of providing an ambience for the prayers of suffering men who fight against the world, the devil and the flesh and who long for heaven.

These two examples show the influence exerted by the naturalist trend of the epoch on not only the temporal sphere--but on the spiritual sphere as well.

(*) This article was originally published in the magazine Catolicismo, Issue #25, May 1953. It has been translated and adapted for publication without the author's revision. –Ed.