Our article deals with two Japanese works of modern art.

In the first picture, Japanese painter Nobuya Abe (1913-1971) presents the suffering of a contemporary oriental man imploring the aid of humanity. It is a scene of diabolical ugliness, absolute despair and a total absence of any thought of confidence in God. 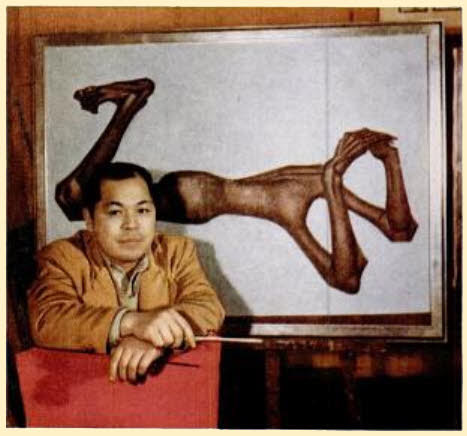 The picture represents the pagan pain of a human victim of a pagan world with the hideousness proper to its style. This human being suffers in all of his organs. He suffers everywhere and in every fiber of his being. He suffers hating his pain, not comprehending it in any way. He strives to free himself of it as soon as possible. However, he does not confide in any solutions because he believes neither in Providence and only directs his supplications toward an inexorably bad humanity which oppresses him. By its strident despair and the madness of its forms and moral horizons, the painting is, in short, an anticipation of hell. 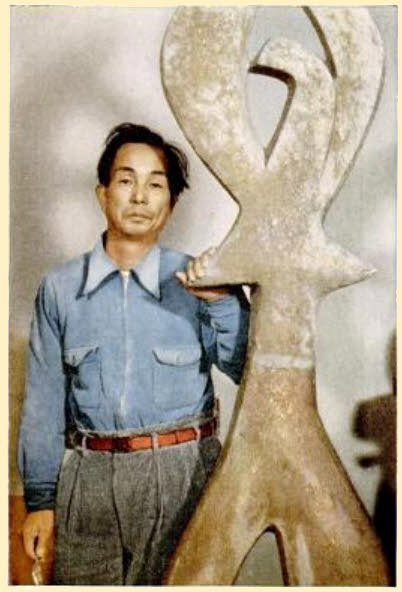 The other picture represents the human body! It is a work of the surrealist sculptor Sueo Kasagi. Compare – if possible – this “human body” with the figure of Saint Francis Xavier in the third picture at the bottom of the page. In the latter picture, the faith of Saint Francis appears to imbue his body with dignity and supernatural fortitude. In the sculpture, the artist conceives a delirious portrayal of the body that is neither human nor does it resemble anything living or capable of life!

The third picture represents Saint Francis Xavier on the high seas, imploring the help of God during a terrible storm. The great apostle of the Orient had set out from Malacca in a fragile boat on the way to Japan, the Empire of the Rising Sun when a storm overtook them. His traveling companions were seized with panic, but Xavier was fearless, placing all his confidence in Providence. God benignly heard the prayer of his servant and the storm subsided without harming anyone.

The picture portrays the powerful movement of the waves, the dramatic beauty of the tumultuous sea, the helplessness of the boat which was like a toy tossed among the elements, the panic of the crewmen, and the serenity, fortitude and supernatural spirit of Xavier. Everything presents a dazzling contrast. On the one hand, the watery abysses of the sea appear to want to open and swallow Saint Francis and the others. On the other hand, there is his perfect serenity because he confides entirely in Heaven. The scene is a glorification of the virtue of confidence that is rich in intelligence, tact and true artistic sense.

A final observation, the Church is universal. However, her influence adjusts to each time and place. It admirably respects and even favors the legitimate characteristics proper to each people and epoch. This is why the picture portraying Saint Frances Xavier in the storm has all of the refinement, imagination and richness of expression of the Far East, yet is also imbued with the warm and vigorous breath of genuine Catholic inspiration.

On contrary, the artistic schools of the first two pictures kill all the characteristics of place and time. All one had to do is visit a modern art exhibit to note how similar hideous works like these are sprouting up with desolating uniformity nowadays in all parts of the world. Such art restricts and asphyxiates the legitimate artistic inspiration proper to each nation and replaces it with a profoundly erroneous internationalism. This is the exact opposite of the admirable universality of the Church.

(*) This article was originally published in the magazine Catolicismo, Issue #31, July 1953. It has been translated and adapted for publication without the author's revision. –Ed.