While the horse is increasingly abandoned as a means of transportation, it continues to be in vogue in sport. Everywhere, horsemanship continues to be an object of lively interest. Football and boxing champions have not destroyed the popularity of the jockey. Indeed, the qualities that an authentic horseman should embody – daring and prudence, acute perception, presence of mind, agility, knowledge and perfect control in the saddle – merit public acclaim.

These pictures show three horsemen jumping difficult obstacles. They are typical of photographs found in equestrian clubs throughout the world. It is delightful to contemplate the dexterity, strength and elegance of these three horsemen.

However they are not horsemen, but horsewomen. The elements of distinction in French horsemanship, the way of riding, the attire, in short everything taken together gives them a markedly masculine appearance.

Without going into details it is good to note how anti-natural and abnormal it is for a woman to look like a man in any circumstance. It is just as anti-natural and abnormal for a man to look like a woman. This strange mania for masculinizing women (not to mention the feminization of men!) also infiltrates horsemanship, as is shown in the pictures above.

Where does this tendency come from? In each case, it is covertly introduced under a different pretext: convenience, simplicity or economy. In the case of horsemanship, freedom of movement and safety were perhaps the excuses used. However these are mere deceptions…

Here we have a charming group of German horsewomen, who gallop swiftly in an aristocratic park. Using sidesaddles, they ride with the distinction of true ladies, which does not impede their gallop from having the speed, lack of restraint, and lightness of the “Ride of the Valkyries.” Their whole costume displays all the grace and delicacy of dignified ladies in a highly civilized nation. Yet the sportive note, inseparable from horsemanship, is not damaged in the least. (The word sportive here is in its good sense, although discussion of its multiple and dubious applications would demand a whole article.) 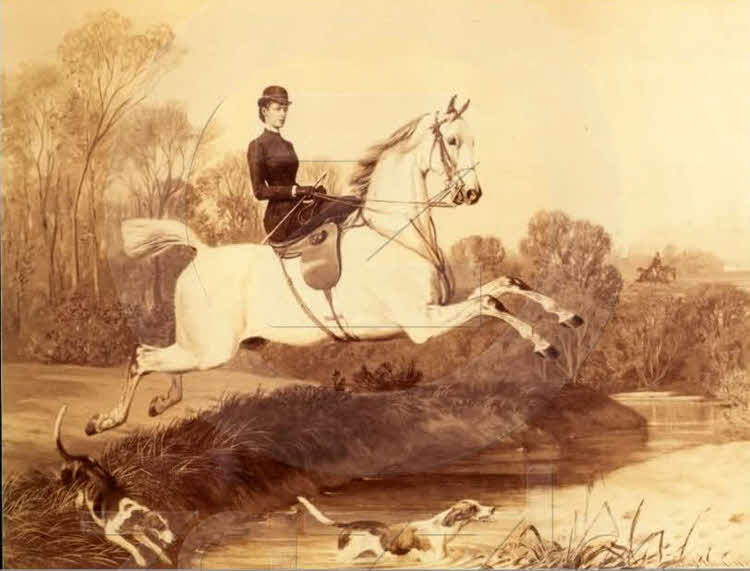 Practical reasons, then, are not what impose the masculinization of women in horsmanship. Rather, it is a manifestation of the tendency, more apparent today than ever, to level, equalize, homogenize and confound everything.

(*) This article was originally published in the magazine Catolicismo, Issue #28, April 1953. It has been translated and adapted for publication without the author's revision. –Ed.