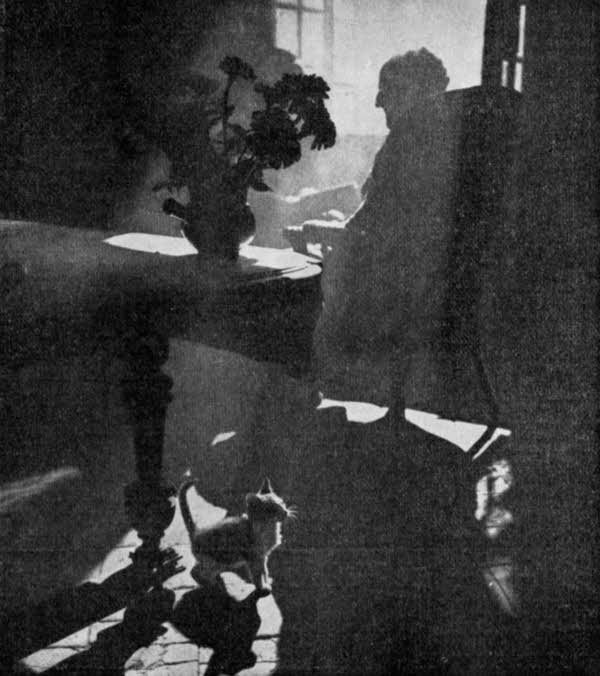 The expressive profile of this man resting in his easy chair discloses remnants of strength preserved from other days. Something imponderable, yet very clear, makes one see that this is a person who is worn, an old man perhaps or someone on the edge of old age, consumed prematurely by infirmity or by nostalgia and memories. And around him, like the frame of a picture, are peaceful homey objects which speak with a silent voice. How much is said through them in this cozy penumbra made of shadows fraternally harmonized with a splendid stream of morning light! In short, what an ambience may be present in the simple room of an old man!

From that chair made for a dignified repose, this man looks through the wide open window upon a whole panorama, while he is being inundated with a light that shines without burning. It is a very suitable situation for considering from above and at a distance persons and things as well as the past and the whole of life. These are precisely the grand considerations which are the distraction of the old, the highest fruit of their experience, and their best preparation for eternity.

Such reflections demand a habit full of quietude, in which the soul may fly to high regions and things serve the body amiably so that it will not perturb the soul. His eyes rest calmly in these noble and friendly penumbras in which familiar objects manifest their unpretentious and affable beauty. On top of the massive, carved wooden table are a piece of bread left from last night's supper, a picturesque vase, and some big and rather rustic flowers. Everything is decent, agreeable, serious, and at the same time delicate. And when the soul, tired of higher considerations, looks for distractions, it really has something with which to entertain itself. It has the kitten which represents the factor of vivacity, grace, and fantasy in the picture; it has the floor of stone or brick whose rectangular blocks are so charming in the sunlight; it has the table which evokes so many family dinners in other times; it has the flowers which are a note of animation and joy. It has every one of these things, and, much more than that, it has them as a whole, that is to say, it has the ambience.

Nothing is super clean nor super orderly in this scene. In no way is it trying to appear to be richer than it actually is.

The things are simply what they are. And they make up an atmosphere filled with meanings as good for the soul as the free air and sunlight, which the old man appears to be drinking in great drafts, are for the body.

(*) This article was originally published in the magazine Catolicismo, Issue #108, December 1959. It has been translated and adapted for publication without the author's revision. –Ed.