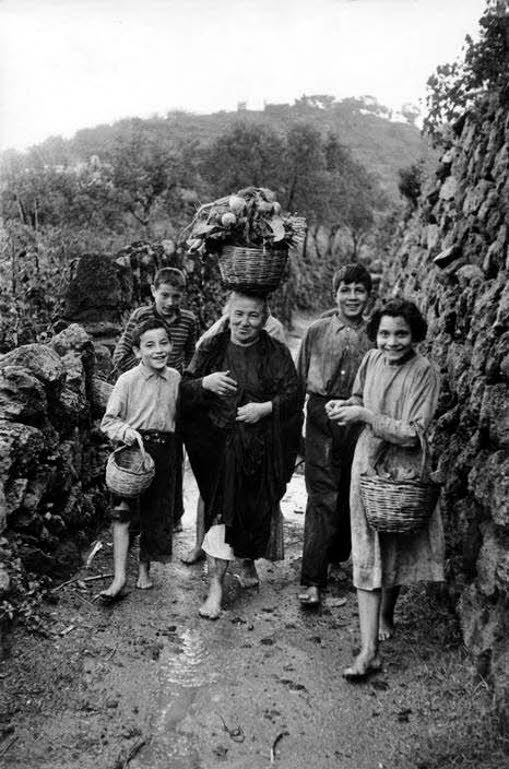 This scene is from the island of Ischia, in Italy, after a storm. Nature has recovered her cheerful appearance and an elderly peasant woman accompanied by her children – perhaps her grandchildren – walks up a hillside. The road is not made of asphalt, nor is it lined with movie theaters, cafes, windows displays or flashy advertisements. No one in this group dreams of having a Cadillac or even a Lambretta. All are barefoot and dressed like poor folk.

Nevertheless, how healthy they are! How their souls overflow with those simple and fundamental joys of country life! The age-old tradition of Christian austerity makes them feel so well. They are happy because they are in good health, the air is pure, the countryside is beautiful, and they are rooted in a family atmosphere full of love without sentimentality but rich in the sense of sacrifice and mutual dedication.

In the simplicity of their ways, the children gather around the central figure with an attitude of true veneration. In this veneration, there is so much affection and confidence!

We are far from belittling the benefits that civilization and culture provide. Nonetheless, by a monstrous deviation caused by neopaganism, we live in an age where civilization and culture rouse insatiable appetites and ambitions in men and artificial pleasures that destroy the Christian sense of austerity and sacrifice. The unleashed passions eliminate a certain freshness of soul whereby one can taste the temperate satisfactions of a daily life consecrated to prayer, duty and family. For the victims of this process, their existence is transformed into a tragic rush in search of gold or a frenzied dance around the pleasures of the flesh.

We were not given life to be happy but to render glory to God. However, it is important to note that even from the viewpoint of earthly happiness, neopaganism is bad business. There is more joy in an austere and Christian society, even when life is modest, than in the fallacious splendor of a super-civilization – perhaps better said, a “pseudo-civilization”- that puts all its happiness in the delights of sensuality or the illusions of money. 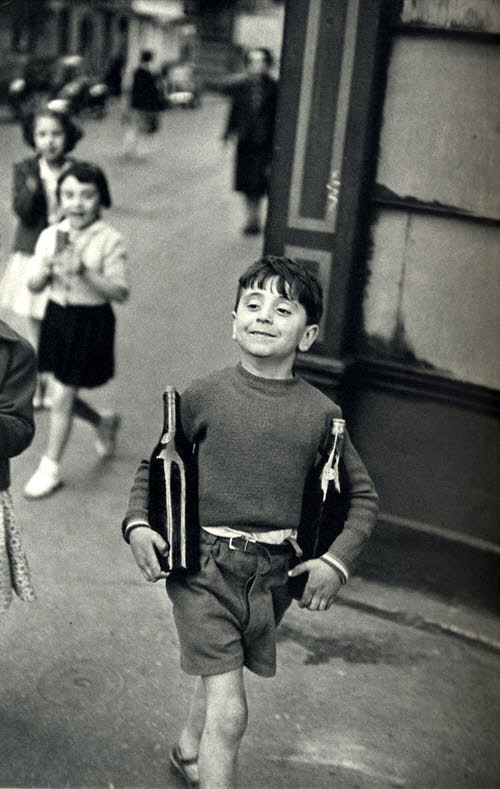 What modest pleasure! What triumphant and overflowing joy! How can such a meager pleasure cause so much delight?

He is obviously a boy from a very modest social class. He is dressed with extreme simplicity though not in poverty. In classes like his, people often preserve – even in large cities – a chaste and austere joy in living a simple, toilsome, everyday life. However it is a life directly or indirectly inspired by the supernatural and beneficent influence of faith. They accumulate reserves of peace of soul, vitality and virtuous energy that delight with any supplementary small treat, and with this they are content. On the table of a family like this, a small portion of lavishness of food and drink is enough to cause great joy.

So once again one sees that it is not abundance of gold and much less excesses of luxury that give man the measure of happiness possible on earth. On the contrary, it is in mortification, in sobriety, in the serious and effective integration in a normal and, at times, painful daily life that man acquires that virtuous balance that affords him the pleasure of living.

But, after mankind abandoned Our Lord Jesus Christ and His Holy Church, all these moral values, whose source is grace, began to decline. What the devil promises man is exactly what he will steal from him. Since the dawn of Western man’s apostasy in the fourteenth century, the devil has been promising a civilization that uses technology to multiply the riches and delights of sensuality to produce a greater joy of living!

(*) This article was originally published in the magazine Catolicismo, Issue #89, June 1958. It has been translated and adapted for publication without the author's revision. –Ed.