There is something about the military or police uniform that inspires sentiments of respect, admiration, and even awe. The law-abiding citizen sees in the uniform a representative of the legitimate power of the state tasked with protecting the good order from all enemies foreign and domestic. He learns to love the nobility of such an occupation and the dignity of the temporal authority it represents.

The uniform is above all a symbol. The innumerable styles, colors, and designs all point to one, universal truth: the legitimacy of the state’s authority. Although the state is constituted of fallible human beings, its authority ultimately comes from God. As Our Lord Jesus Christ told Pontius Pilate, “Thou shouldst not have any power against me, unless it were given thee from above.”  Since everything that comes from God is dignified, beautiful, and holy, the authority of the legitimate temporal ruler, through Natural Law, participates in those virtues.

Beginning in the Middle Ages, the kingdoms of the Christian West sought to reflect the nobleness of military duty by developing magnificent uniforms, traditions, and ceremonies. Remnants of this splendor can still be seen today, such as the Stockholm Royal Guard (pictured below). 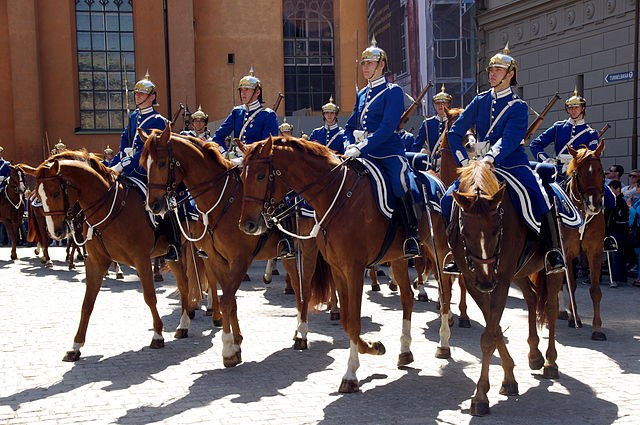 The first impression this picture causes in the observer is one of awed admiration. Indeed, the seriousness of the scene commands it. The gravity of the moment, the dignity of their office, and their responsibility before King and country are clear.

Their blue and white coats, gleaming spiked helmets, well-groomed horses, elegant posture and serious countenances emit a brilliance that goes beyond the physical. They represent the honor of the military duty and the memory of countless countrymen fallen in battle for the fatherland. Above all, they reflect the dignity, splendor, and legitimacy of the Christian state.

Such uniforms, ceremony, and traditions are not born of the whim of some government program or socialist mandate. Rather, they usually come into being in an organic and unplanned way.  Great battles, political crises, unique circumstances, feats of heroism, and Divine Providence all play a role in their formation.

What makes this military shine with a particular brilliance, and what distinguishes it from a military reenactment, is that it is a living tradition. The uniforms and ceremonies are not dried up artifacts lost and forgotten in the corner of a dusty museum but a living, breathing tradition boldly marching into the future.

It is not surprising that the modern world, in its mania for standardization and aversion for beauty has slowly abolished the traditional uniform and replaced it with clothing that is egalitarian, shabby, or even vulgar. A typical example of this is the picture of the Philadelphia police officer. 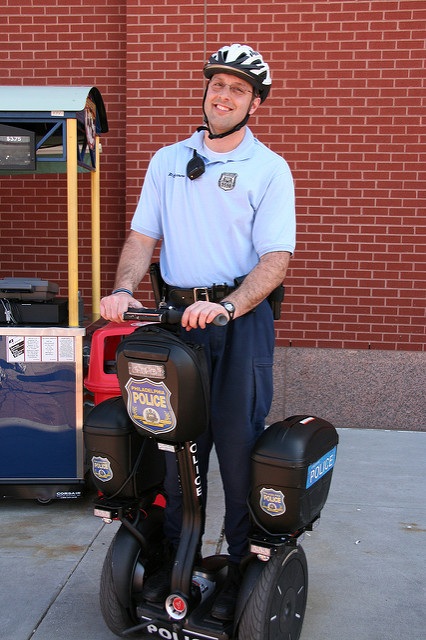 Although he may be a dedicated, honest, competent police officer with a stellar record, his uniform certainly doesn’t say so. When compared with the Swedish Royal Guard there is clearly a decadence.

The military and police occupations are closely related. What one does against foreign enemies, the other does with domestic ones. They both represent the legitimate power of the state placed at the service of the common good. They both protect the good and fight evil. Since their final ends and the source of their authority are noble, their uniforms ought to reflect that nobility.

It is for those reasons that socialists have a natural dislike for the uniform. As Plinio Corrêa de Oliveira pointed out in Revolution and Counter-Revolution, the uniform implicitly speaks of certain truths that contradict the socialist mentality. These include the existence of values greater than life itself and the existence of morality, since the military is based on the notion that evil is to be fought and good protected.

Compared to the Stockholm Royal Guard, this more modern police uniform reflects an inversion of values. Rather than reflect the sublime principles for which he fights and risks his life, the dominating tones in his dress are comfort, practicality, efficiency, and economy.  He has exchanged his police coat and tie for an unbuttoned short-sleeve polo shirt, certainly for its superior comfort and lower cost. He doesn’t walk his beat, but rides a Segway, doubtless because some analyst proved that he could cover more ground in one day (and they could hire fewer officers). His hat, when he wears one at all, is a helmet that provides protection from falls and nothing more. His cargo pants are unironed and unironable. In short, he looks like he is on vacation, playing down danger, risk and evil which are the reasons of his duty.

The only way to know that he is a policeman at all is the Philadelphia Police decal on his Segway and the radio hanging from his shoulder. If it weren’t for his badge and the power behind it, no one would take him seriously.

Appearances matter.  When a citizen sees a police officer dressed no better (or worse) than he is, or in a way that implicitly denies the dignity of his office, it erodes the admiration and respect men naturally have for his authority. Egalitarian dress leads to egalitarian treatment.

Never before in our history has the legitimate authority of the state been contested like today. Although the Left has always expressed resentment for any authority, be it parental, legal, or military, the rise of the so-called “Black Lives Matter” movement has whipped up anti-police sentiment like never before.

It would be absurd to place the blame for the emergence of “Black Lives Matter” and anti-police sentiment exclusively on the decline of police uniforms. Socialist agitators, media propaganda, and many other factors play a significant part. But the decline of the uniform has played an important role in the erosion of public respect for authority. If those who represent legitimate authority would like to command respect and admiration, rather than merely instill fear of arrest, they need to dress accordingly. Adopting the traditional uniform would help.