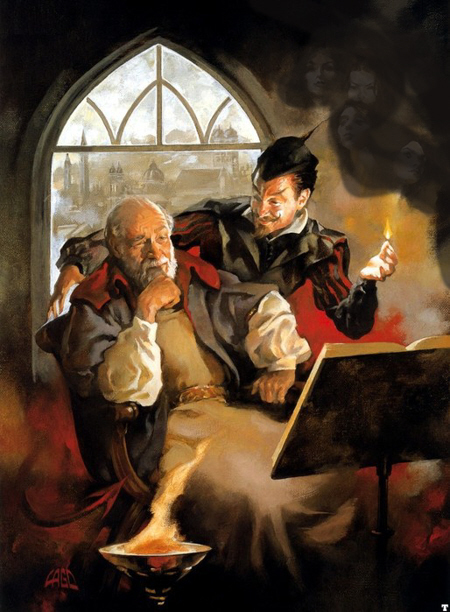 The Church teaches that God created angels vastly superior to man. Pure spirits possessing a most lucid intelligence and great power, they surpass by nature even the most gifted of men. As a consequence of their revolt, the fallen angels lost their virtue, but not their intelligence or power. In accord with His Divine Providence, God restrains their activity. However, they remain far superior to man, by nature.

Accordingly, the Church always approved artists’ depictions of the demon as an intelligent, shrewd, astute and powerful being, although full of malice in all his designs. She even sanctions his portrayal as a creature with captivating charms, reflecting the qualities that the spirit of darkness exploits to disguise himself so that he may seduce men.

Our first picture is an example of such a presentation of the demon. Diabolical and shrewd, astute with a penetrating psychology and full of guile, the demon suggests, in a beguiling manner, thoughts of perdition to slumbering Dr. Faust. This is the classical depiction of the devil. We can hardly imagine him otherwise.

However, how are faithful angels portrayed today?

They are shown as well-intentioned, happy and innocent beings. This is in conformance with their eminent sanctity, blessedness, and purity.

Nevertheless, such depictions lack proper balance by emphasizing the goodness and purity of the faithful angels, while failing to convey their admirable intelligence, strength and majesty. Instead, they are often painted as weak creatures with no hint of courage. 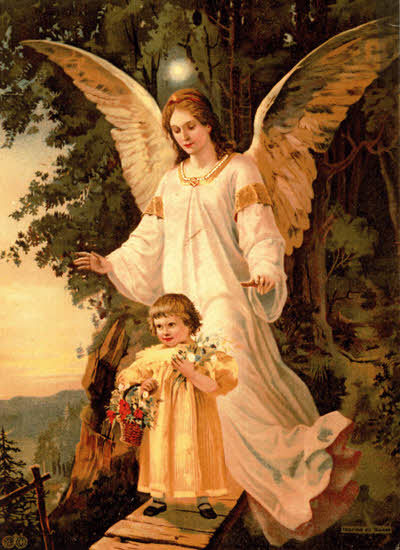 Our second picture shows a child crossing a wobbly bridge. A guardian angel is protecting her.

Naturally, the idea of a child continuing her carefree walk lovingly guarded by a celestial Prince is quite touching. Still, if we pay closer attention to this prince, especially his countenance, does he not lack the strength, intelligence, acuteness, and agility proper to angelic nature, as present in every portrayal of the Prince of Darkness?

Examine the body of the good angel in the painting. Observe the soft, unintelligent and slackened attitude. Compare it to the lithe agility and alertness of the demon.

Could the contrast be any sharper?

Does it make sense?

By insistently representing the demon as intelligent, lively and capable; and the good angel as soft, expressionless and almost foolish, what impression is conveyed to the public?

One impression is that the practice of virtue results in creatures lacking in backbone and sense, while, on the contrary, vice is the practice of powerful and intelligent beings.

Thus we see yet another example of the deception which romanticism continues to exercise profoundly over many religious ambiances.

(*) This article was originally published in the magazine Catolicismo, Issue #41, May 1954. It has been translated and adapted for publication without the author's revision. –Ed.