The traveler in this photo is lounging in a massage chair.  He dropped his luggage, placed his Smartphone on the arm of the chair, and is reclining on the soft, black, faux-leather for a mechanical massage.  He is an average man, somewhat overweight, and perhaps a bit tired by the stress of routine business. His eyes are closed as he indulges in a moment of bourgeois comfort, surrounded by the movement and noise of a modern airport.

The plugged-in chair is holding the tired man like a charging dock holds an iPhone. After the frenzy and rush of travel, he plugs himself into the vibrating massage chair to recharge for another day of hustle and bustle.

He is not ashamed to lounge in public nor does he pay attention to those around him or what they might be thinking of his public spectacle.  If an important personage were to walk in front of him, he would not move, nor pay the slightest attention.

To treat a public hallway like a family room is imbalanced. Why? Because in the realm of modesty and manners -- both forgotten virtues -- one does not do certain acts in public.  Some behavior, although legitimate, is private.  Rest is a necessity, of course, but that does not mean that one can sprawl out in the middle of a crowded airport hallway to take a nap.

This man has relinquished his sense of propriety, the virtue whereby an individual maintains his dignity and modesty of appearance, especially by taking into account the delicate rules of decorum and consideration of others, which naturally applies to one’s own appearance.  His sense of propriety has been collectivized and collectivism will affect his ideas to some degree.  He may not be a socialist or a socialist sympathizer, but his capacity to oppose socialism is weakened. 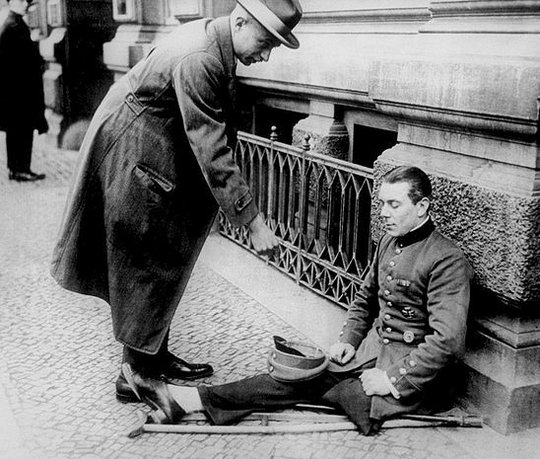 Now, compare the airport lounger to the wounded warrior begging for alms. Wait… Is he really begging?  His appearance is so pristine that it is almost hard to believe that he is a beggar!  He is in military uniform, complete with ribbon and Iron Cross decorations. He is clean-shaven, has combed his hair, and most strikingly, is sitting in such an upright position.  His body is resting on the cold sidewalk while his soul stands at attention.

Does this beggar have propriety?  Yes, he unquestionably does. Although reduced to a state of lameness and blindness, he maintains his dignity as a man, soldier, wounded war veteran and beggar.

Even though the beggar is the one receiving the alms, the impression is that the almsgiver is accepting something even greater than financial assistance in return from the beggar. The almsgiver recognizes how the soldier has sacrificed himself for his country to the point of being blind and lame for the rest of his life.  In a way, he fought for the almsgiver too.  The alms he gives are a token of reverence, a sign of homage and thanksgiving for this sacrifice.

The crippled soldier would be justified (at least more than the business man) by slouching against the wall. But he refuses to do so because propriety is a part of his being. As a result, he sits erect with his head bowed slightly to show his respect for himself, but more importantly to honor the institution to which he gave himself.  Even if this means pain or discomfort, he does not care.

The hero does not rely on the State for free handouts.  He is brave and has initiative. He would certainly turn down socialist State control and leftist collectivist efforts.It is interesting to compare the two men, their characters and ways of being. Who would you prefer to imitate, the tired traveler or the wounded warrior?