Today was the last day of our tour for the unborn. We campaigned in the downtown of Houston where we got both vehicle and pedestrian traffic. All-in-all it was a good campaign with the majority in support.

Two men walked up and said, while pointing at the TFP standard, “Wow. That’s an awesome sign you have!”

A young woman took a flyer, 10 Reasons to Protect the Unborn, then said: “Convert to Satanism before it’s too late. Hell is lit [exciting],” and continued walking. As a way of attempting to justify her view on abortion she added, “Oh, and overpopulation is a thing.”  To which one of the TFP volunteers responded, “Sure. Just go out and take a look at West Texas.”

How revealing.  Why did this woman mention Satan and Hell when the discussion at hand was only focused on abortion?  The episode clearly demonstrates how the struggle between good and evil -- the right to life vs. the culture of death -- is ultimately a spiritual battle between God and Satan.

One man walking by said, “Thank you for doing what you’re doing.” Immediately afterward, a woman reading our flyer looked up at the same member and said, “You are doing a very good thing.”

Two men walking by with a group of little children said, “We’re with you guys. This is awesome!” 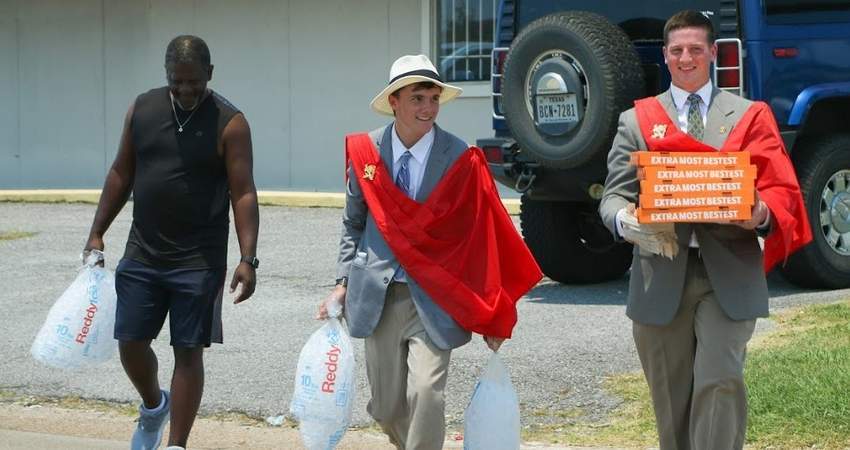 Unknown pro-life man (L) drops off pizza and drinks for everyone.

Two men were crossing the street, deep in conversation. One was explaining to the other, “They’re the ones that bring out the bagpipes.” He then walked up to the TFP bagpiper, very determined, and said, “I follow you on Youtube. This is great!”

A gentleman walking by was offered a flyer. The TFP member told him that it was against abortion to which he emphatically said, “Absolutely! I agree. Keep it up!”

As we wrap up this summer caravan in defense of the unborn, we all look forward to the next opportunity we can get to hit the streets to promote God's holy law.  May the graces we received by being His unworthy instruments bear much fruit, attract more blessings from Heaven, and hasten the day we can say:

"Abortion and its culture of death and impurity have finally been swept into the dustbin of history.  Satan was defeated.  The Virgin Mary has triumphed."