The passerby tried to justify Dr. Gosnell's brutal abortions. "It's not murder." Refering to pregnant mothers, she said: "There's nothing there until there's love."

TFP volunteer: "If it's not murder, then what is it?"

TFP: "Really? Do you kill the weeds?"

"You have to love. There's not life until there's love."

On Monday, April 28, 2013, six TFP Student Action members travelled to downtown Philadelphia to campaign against abortion. The atmosphere was highly charged as the young men formed outside the Center for Criminal Justice, where final arguments in the murder trial of abortionist Kermit Gosnell were taking place.  He is being charged with eights counts of murder.

Shortly after arriving and forming beside the main entrance of the court building, TFP members began praying the rosary in reparation for the sin of abortion.  Many passersby frequented the busy streets around the courthouse, amid a light rain that persisted through the morning. Volunteers distributed the flyer St. Michael the Archangel and the Pro-Life Victory, showing the need for invoking the prince of the heavenly armies for victory in the fight against abortion. It wasn’t long before this firm condemnation of the sin of abortion was met with some vocal opposition. 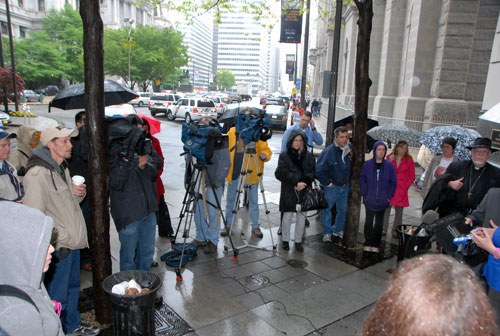 Soon after beginning the rosary, two elderly women approached and began shouting insults. “It’s not murder! You men don’t ever have to have one!” This elicited the quick reply “Abortion is a sin, shame on you!”

As another woman passed reading the signs opposing abortion, she said in disgust, “It isn’t murder… it’s just like weeding your garden.” Following her questionable logic, a volunteer replied, “When you uproot the weeds from your garden, what do you do with them? You’re not transplanting them, you’re killing them.”

The negative reactions were counteracted by many supportive comments. A group of young women gave thumbs up as they crossed the intersection, one of whom shouted back, “That’s right, abortion is murder. I’m keeping my baby!”

The controversial case of Kermit Gosnell received very little media coverage since beginning two months ago. On Friday, April 12, advocates of the unborn sought to end the media blackout by using the social networking site Twitter to openly challenge journalists and media outlets, alleging bias in not reporting one of the most horrific murder trials in living memory. 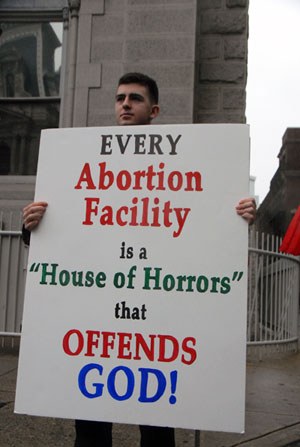 According to LifeSiteNews.com, 166,800 tweets using the #Gosnell hashtag were sent in a matter of 12 hours. This put overwhelming pressure on members of the media, which resulted in admissions of bias and oversight, and new attempts to bring the story to the public. The website whoisgosnell.com was set up to track the coverage of the story,  while also showcasing a 20-minute documentary exposing what was dubbed Gosnell’s ‘house of horrors’.

An Offense Against God

As the morning changed to afternoon, TFP Student Action was joined by other abortion opponents for a prayer vigil outside the courthouse. Leaders in the fight for the unborn led the crowd in prayer, and gave prepared statements to the media. Many large signs and banners showed outrage over the crimes Gosnell perpetrated.

Consistent in opposing abortion, one TFP sign read: “Every abortion facility is a house of horrors that offends God!” Anyone who read it immediately reacted, some giving approval, others showing contempt, but the vast majority averting their eyes and choosing to ignore reality.

The campaign came to a close in mid-afternoon, all mindful that the outcome of the trial was still hanging in the balance. The six young men headed home, more determined than ever to continue legal and peaceful battle to end abortion. May St. Michael lead the way in this spiritual combat to bring about a pro-life victory in America and throughout the world.