Yes, the slippery slope is real.  When the flood gates of lust and unruly passions are opened wide in the name of "tolerance," what can you expect?  Well, the answer is simple: you can expect a cascade of moral aberrations.

But don't take my word for it.  Listen to what one same-sex "marriage" advocate said on camera during a discussion with TFP Student Action volunteers in Bloomsburg, Penn. on Labor Day.  The individual stated he did not see a problem with other moral aberrations: "Sure, if that's what he feels like.  It doesn't affect me!"

On Sept. 1, TFP Student Action volunteers campaigned in defense of natural marriage in Bloomsburg, Penn. where W. W. Bridal Boutique is being persecuted for not pandering to the unreasonable demands of the homosexual movement.  Please pray for the owners of this boutique who want to preserve the sacred institution of natural marriage for future generations.

The peaceful TFP demonstration received steady public support.  However, the event was rudely interrupted by a handful of pro-homosexual counter-demonstrators who harassed the young pro-family volunteers by hurling water balloons and tangerines at them from moving vehicles, while those on the sidewalk laced their speech against God's marriage with foul language.

"Can I bring you some water?" asked a college student in support of the TFP effort.  "It's my way of helping what you're doing," she said.  "When I entered college, I did everything the crowd wanted me to do.  It isn't good.  I literally almost died.  I almost lost my life," she lamented.  "So please continue what you are doing and don't stop."

With the grace of God, TFP Student Action volunteers will never stop promoting the truth about marriage and moral values. 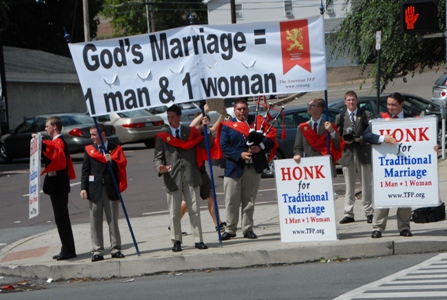