About fifty local pro-life activists gathered to oppose Planned Parenthood’s attempt to open a new mega abortion center in Auburn Hills, north of Detroit.  Ignoring the wet and chilly weather, we prayed the rosary in front of the building slated to become a clinic where more innocent lives might be snuffed out of existence.  A local film crew was on the spot, filming both our campaign and the public reaction thereto. 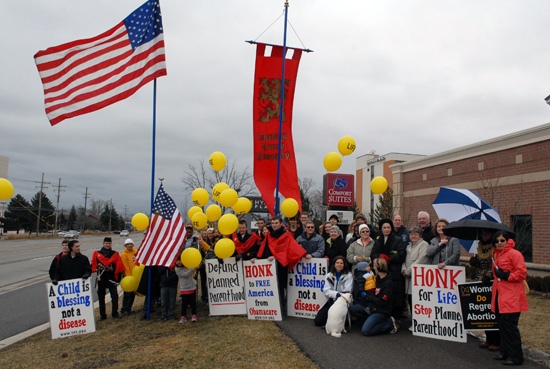 A lively contingent of young Crusaders for Life, mostly in their teens, joined the rally with bright yellow balloons emblazoned with the word “LIFE.”  During the recitation of the rosary, they fell to their knees on the wet grass or hard sidewalk, happy to make that extra sacrifice to end abortion.

“We hope to keep this abortion facility closed,” said David Theisen, founder of Real Estate for Life.  “Planned Parenthood purchased the building a year ago, but it’s still vacant. There’s zero activity -- our prayers are being answered.” 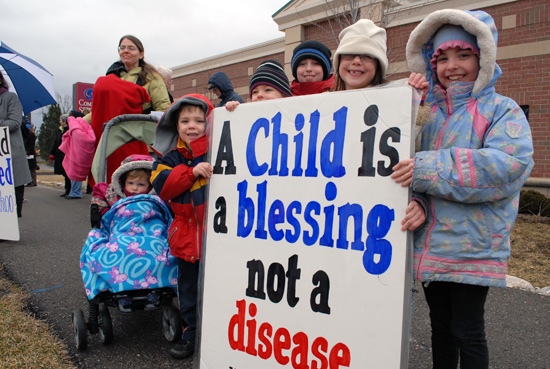 Following the pro-life campaign, we went out in pairs, distributing Confronting Religious Persecution in America fliers in Sterling Heights. We continue to find that the general public is strongly opposed to Obamacare’s socialist attack on the Catholic Church and true American freedom.

Later in the day, we visited a local family who had generously invited us to dinner. Dining on traditional Chaldean fare, and sustained by a steady conviviality, we passed a few welcome hours of rest before starting the last and final leg of our journey back to Pennsylvania.

With approximately 10,000 fliers distributed, countless horns honked, thousands of people reached, and hundreds of debates engaged in, we return tired, but joyful and certain of God’s final victory. As Our Lord promised to Saint Peter, the gates of Hell shall not prevail.