Young Polish TFP member, Stanislaw Sadowski, who was leading a rosary in front of the historic Holy Cross Basilica in Warsaw was attacked by a man who pulled his microphone away and damaged his loudspeaker.  Catholics yelled “aggressor” to alert law enforcement officers about the incident.  The police intervened while a larger mob of feminists and LGBT advocates waved coat hangers and chanted obscenities against the Church.

Another TFP volunteer was struck by a metal selfie stick. The pro-abortion attacker attempted to flee but police officers quickly moved in, forming a protective barrier between the mob and the TFP volunteers praying on the sidewalk. More officers blocked the entrance of the church to prevent further harm.

Aspects of the confrontation were caught on camera and can be seen here:

As the pro-abortion mob howled with rage, undaunted TFP volunteers responded with a ditty set to the children’s tune, Frere Jacques, which ran:

Although the pro-abortion movement insisted their protests were “peaceful,” the facts speak for themselves.

Jedrzej Jablonski, a faithful Catholic close to the events, tells us what he saw.  “On Monday, October 26, 2020, at Three Crosses Square (Plac Trzech Krzyży) in Warsaw, hundreds of [pro-abortion agitators] decided to insult and incite hatred [against the Church,]” he explained.

“They started to throw at a group of several hundred [Catholic] people standing in front of them: eggs, bags of oil paint (permanently damaging clothes and destroying the church’s facade), toilet paper, and finally plastic and glass bottles, as well as firecrackers,” Jablonski said.

Despite the abuse, Catholics stood firm in front of St. Alexander’s Church to protect it from destruction and invasion as they prayed and sang religious hymns such as Christus Vincit and We Want God.

“At least two people from the church guards were injured, one in the forehead, the other (a woman) on the hand and required treatment,” said Jablonski. “In the photo, my good friend was hit [and injured] on the forehead with a bottle.” 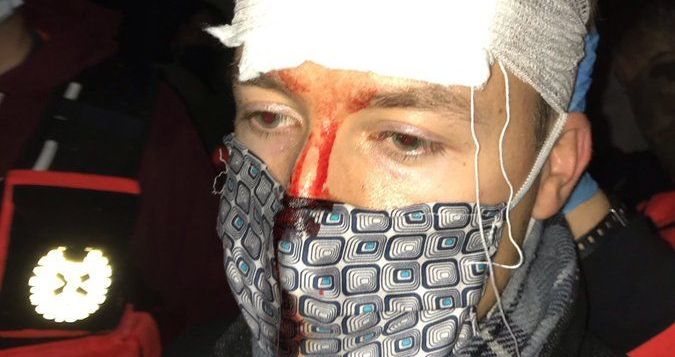 The violent, vulgar and illegal protests in front of Catholic churches noticeably increased on October 25 and 26, 2020.

“Mobs started invading churches during holy Mass,” said TFP volunteer Slawek Pludowski.  “But also groups of Catholics started mobilizing to defend churches, and after a few days of high tension, the pro-abortionists announced they were changing their tactics, claiming that churches are irrelevant for their cause.”

Catholics fighting the good fight in Poland are requesting prayers.

Misia Ptak contacted TFP Student Action.  “I am writing to you because our situation is very hard here in Poland. Many churches are being profaned and vandalized. Young men who protect them are getting injured with bottles, batons and rocks. I would be grateful if you would share our fight on your page.”

In the video footage, pro-abortion activists are seen waving rainbow flags.  The pro-abortion and pro-homosexual movements are not separate causes but one and the same. The former attacks the innocent preborn child, the later destroys God’s sacred plan for marriage.  Their hatred against God and His Church converge into a single Revolution.  Therefore, in order to be successful in the struggle to save the family, the movement to end the sin of abortion must also vigorously oppose unnatural vice.

Spiritual battle lines are drawn between the City of God and City of Man.

As Saint Maximilian Kolbe pointed out: “Modern times are dominated by Satan and will be more so in the future. The conflict with hell cannot be engaged by men, even the most clever. The lmmaculata alone has from God the promise of victory over Satan. However, assumed into heaven, the Mother of God now requires our cooperation. She seeks souls who will consecrate themselves entirely to her, who will become in her hands effective instruments for the defeat of Satan and the spreading of God’s kingdom upon earth.”

Please support the brave Polish Catholics in their noble pro-family fight by posting a comment for them below the video on YouTube.