"An unjust law is no law at all." -- Saint Augustine

Some call her a new Saint Joan of Arc, others say she is just a common clerk in Rowan County, Kentucky, with an uncommon backbone who loves God.  Whatever the case might be, Kim Davis was faced with two options:  either issue same-sex "marriage" licenses and violate her conscience or obey God's law and resist.  She chose to serve God first and, as a consequence, was targeted by the homosexual movement and locked up by a U.S. District Judge in the Carter County Detention Center on September 3, where she remains without bail.

Unlike many elected officials who lack the courage to be morally correct, Kim Davis' heroic example of moral conviction has inspired not only rural Kentucky, but galvanized Americans across the country.  Talking about her resolve, her husband Joe Davis, said, "She won't bow, I promise you." 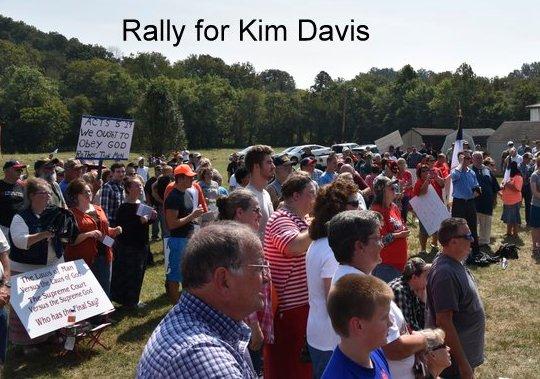 Hours after hearing about Kim Davis' imprisonment, a team of thirteen TFP Student Action volunteers jumped into a van and drove through the night from Pennsylvania to Kentucky to support her.

Our first stop on Friday morning was at the Carter Country Detention Center in Grayson.  Outside the jail, as the sun rose, we prayed a rosary for Kim Davis and for the urgent conversion of America.  Then we made our way to a busy junction on Route 1 and 60 with "Honk for traditional marriage: 1 man + 1 woman" signs and banners, bagpipes and drums.  The response from passing traffic was amazing.

From every corner, the intersection erupted with deafening honks of general approval for Kim Davis and the holy institution of marriage as ordained by God.  Police cars, firemen, ambulance drivers, big trucks, government vehicles, motorcycles -- it seemed like everyone down to the very last car wanted to honk and continue honking through the intersection.  Even those whose horns were broken made it a point to apologize.  "Sorry," shouted one local in his charming Southern drawl, "my horn ain't workin, but I support you."

"We need to teach them right, not wrong," said a lady from her car window, emphatically adding, "God's on our side."  Then a school bus rolled up.  Virtually every student on the bus jumped up and started waving out the window, cheering, applauding giving us a thumbs up.

"I'm with public works and they've instructed us not to say anything, but I'm right there with you," said the young fellow from his pick up truck.  "I'm not much for Church but I know there's a Heaven and a Hell.  What you're doing here means a lot to me.  Thank you!"

TFP volunteer:  "Listen to all the horns honking for true marriage.  You're not alone.  But the liberal media trip over themselves to hide this huge reaction."

Lady in car agrees:  "Yes, they're [liberal media] nothing but born liars."

Hippie on a bicycle:  "You scare people.

"TFP volunteer:  "If we scare people, then why are so many people honking?"

Hippie:  Mutters insult and peddles away.

At the Courthouse in Morehead

As we pulled up to the Courthouse in Morehead where Kim Davis worked before she was arrested, we saw two distinct groups of people.  On one side of the entrance to the court building was a group of pro-homosexual activists agitating rainbow flags, on the other was a group of Kim Davis supporters, defending human nature as God made it -- male and female.

TFP volunteers doubled the number of Kim Davis supporters at the court house, singing songs like "We Want God," "God Bless America" and chanting pro-marriage slogans such as "marriage is an institution that predates the state and the state has no right to change it," and "a moral wrong can never be a civil right."  The pro-homosexual activists shouted vulgar and obscene insults at us, yet TFP volunteers did not respond in kind, of course, but continued playing the bagpipes and drums.

From time to time, a homosexual couple would enter the building for a "marriage" license.  Every time, the media cameras would surround them like a school of adoring piranhas as pro-homosexual escorts trailed them with rainbow umbrellas cheering with frenzy.

The support rally for Kim Davis on Saturday, September 5, attracted about 1,000 people. Local officials, religious leaders and Joe Davis, Kim's husband, delivered speeches on the green in front of the Carter County prison.

The TFP pipe and drum corps played patriotic music and shared copies of their hard-hitting flier with rally goers, 10 Reasons Why Homosexual "Marriage" is Harmful and Must Be Opposed.  One Catholic lady said, "I'm going to put copies of this flier in my church bulletin." 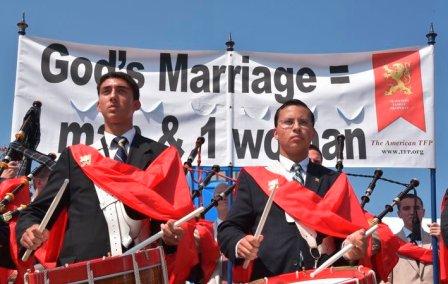 Police officials did an impeccable job directing traffic and keeping the rally safe. "If you need anything," said one of the deputies, "just tell us."

Many of the speakers at the rally expressed their concern over the growing persecution against Christianity, highlighting the urgent need for a peaceful uprising to resist the godless culture of abortion and unnatural sin.  Everyone present -- young and old -- shared the same concern and willingness to fight for Kim Davis' release from prison as well as to remain engaged in the battle for the soul of America.

Travelling in a big group was a good conversation starter.  At Cracker Barrel, for example, curious diners wanted to know why we were in town.  Two couples engaged us in conversation.  "Thank you for what you're doing," said an older gentleman with a firm handshake.  His friend discreetly whispered, "he's a retired Delta Force colonel," so we took advantage to thank him for his military service.  He responded, "no, I thank you," and commented how in many respects the culture war is more important than military service.

The hotel owner where we stayed assured us:  "I know the jailer personally and he's a good, decent guy and believe me they're taking good care of Kim in there.

"In the breakfast room at the hotel the topic of Kim's incarceration inevitably came up.

-- "Things are getting worse and worse," said one fellow, "we need to find a place to move to."

-- "There is no place to move to," said a TFP volunteer.  "This is our country.  We need to stand and fight, not give up and look for a place to hide."  Everyone's ears perked up.

-- "Don't get me going," said the lady on the corner table. "I can give you a sermon." She talked at length about her objections to same-sex "marriage."  She patted us warmly on the shoulder as she left the room, "thank you for doing what you're doing."

-- At the other side of the breakfast hall sat a U.S. Army man with his wife:  "I agree with you.  There is no other country to move to.  I've been to the Middle East and I'm upset we're not allowed to go after ISIS and do what needs to be done," he said.  "We need to put God back in our country.   The reason why our country is becoming so decadent is because people are too politically correct, afraid of offending the person next to them.  We have to stop being politically correct and say what we think.  We're too afraid of what other people might think and it's time to stop caring what they think."

As one of the speakers said at the rally for Kim Davis, "a spark has been lit here, may God's breath blow on it and transform it into a fire."  Yes, may God awaken moral America.  May God inspire a legion of souls to stand up for His Law, just like Kim Davis, and transform our culture. 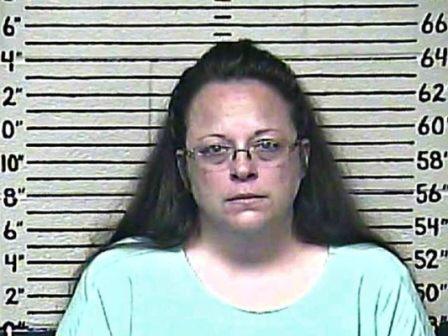