By the time the sun rose on the morning of May 15th, members of the American Society for the Defense of Tradition, Family and Property (TFP) were already at work, preparing for the day’s activities. Our vehicles were soon rolling to their destination:  The heart of New York City – the Bronx. Our purpose: to join a march for traditional marriage organized by State Sen. Ruben Diaz (D-Bronx) and other pro-family leaders. 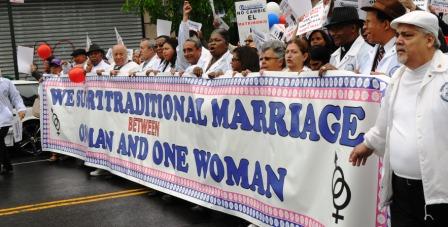 "We support traditional marriage between one man and one woman."

Under a light drizzle, we disembarked at 149th St and 3rd Ave and assembled the Holy Choirs of Angels Corps marching band.  Invited to lead off the march, we positioned ourselves accordingly.  Soon, thousands of traditional marriage supporters surged forward to the sound of God Bless America, holding signs that read: “Adam & Eve = Family,” and “Don’t Change Marriage.”

As the TFP band played stirring marches and patriotic music, people lined the streets and leaned out of windows to see the parade. Although a few passers-by were quite vocal in their opposition, the overall response was positive. 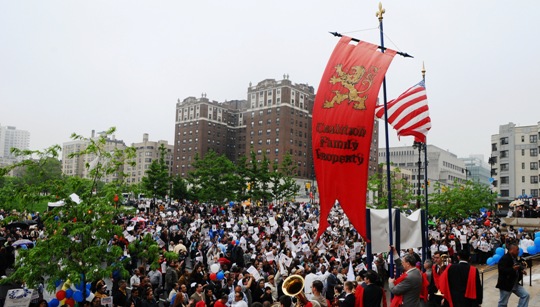 Thousands of traditional marriage supporters gather at the Courthouse.

After marching the twelve blocks to the Bronx County Courthouse located on the Grand Concourse, a line-up of speakers addressed thousands of people from the court house steps, voicing their commitment to the cause of marriage.  The national anthem was sung followed by a rendition of God Bless America by the TFP band.  Volunteers distributed a flier, 10 Reasons Why Homosexual "Marriage" Is Harmful.  In his speech, Sen. Diaz mentioned how he had received death threats from pro-homosexual advocates for simply defending the institution of God-ordained marriage.  Other speakers included Fr. Peter West, Associate Director of Priests for Life, and Brian Brown, President of the National Organization for Marriage. 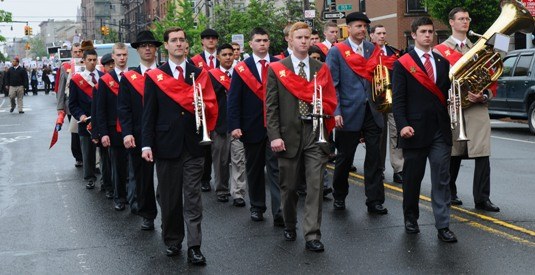 The TFP band kicked off the march with patriotic music.

Our banner, visible to the assembled thousands, boldly proclaimed: “God’s Marriage = One Man + One Woman.” Our flyer, 10 Reasons Why Homosexual “Marriage” is Harmful and Must Be Opposed, was very well received in both English and Spanish.

For the good of the family, let us continue to pray that more and more souls will stand up and peacefully oppose the homosexual agenda, especially in its latest effort to impose same-sex “marriage” on the state of New York.