From every region of France, over 1.4 million people gathered in Paris on Sunday to oppose same-sex "marriage" and homosexual adoption. The pro-family movement has been growing ever since France's National Assembly passed a pro-homosexual "marriage" bill, which will be voted on in the Senate early next month.

The march "La Manif Pour Tous" is the second large-scale demonstration of its kind this year. However, disregarding these multiple pro-family rallies, Socialist President François Hollande continues to push for the redefinition of marriage.

Back to America: the National Organization for Marriage is sponsoring its own March for Marriage in Washington, D.C. on March 26, the day of the Supreme Court hearing on Proposition 8 and DOMA. Thousands are expected to attend the march which is co-sponsored by forty-six pro-family organizations, including the TFP.

The outcome of the Supreme Court's decision will impact the future of marriage not only in California, but nationwide.  The future of marriage hangs in the balance. It will be a Roe v. Wade moment of marriage in America.  For that reason, it is important for pro-family Americans everywhere to pray and join the March for Marriage in Washington, D.C.

Wishful polls and major media outlets would like you to believe that same-sex "marriage" is inevitable and irresistible. However, the record shows a very different reality. A recent rally in Puerto Rico attracted 200,000 people; 600,000 British citizens signed a petition to protect marriage; and efforts to redefine marriage in Illinois and Rhode Island have stalled.

For the future of the family, let us continue fighting the good fight. 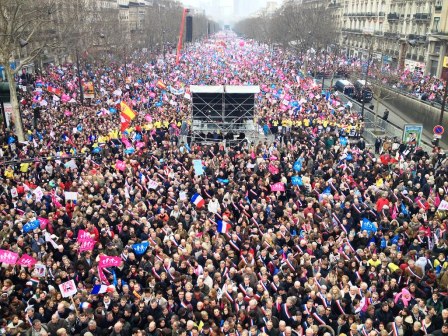