Before talking about our flash rally against abortion in Boston, I should mention that we campaigned in Pawtucket and Warwick, near the airport, yesterday.  The support for traditional marriage was excellent.  “Our newspaper got a call about you, so I decided to come out and see what was going on,” said a reporter.  “The caller said you had to be a Catholic group because you are so well dressed.”  He took photos and was impressed with the amount of honks for God’s marriage from passing vehicles.  “You’re really getting a lot of support,” he said.

In the afternoon we visited parking lots and placed the flier, 10 Reasons Why Homosexual “Marriage” Is Wrong and Must Be Opposed, on parked cars at malls and shopping centers.   It’s a good way to get the right information into more hands.

Our host family in Fall River, Massachusetts, invited us to go with them on Saturday, the Feast of Saint Joseph, to Boston.  Planned Parenthood was holding a rally on the Boston Commons to secure continued tax-dollar funding for abortion and the culture of death.  Local pro-life leaders organized a flash rally at the same location to give the unborn a voice.

While crossing the public park, a woman intercepted TFP volunteer Zachariah Long.  “For real?” she said sarcastically.  “You mean to tell me that you’re pure?”  Zachariah was somewhat puzzled.  Who on earth was this woman and why was she asking him that question.  But he promptly answered: “Yes, I am.”  In a huff, she walked away.  Exiting the van in haste, Zachariah did not notice that the pro-life sign he carried read: “Purity is the answer, not Planned Parenthood.”  It’s an effective sign. Powerful.  “Your sign addresses the crux of the matter,” stated a man who approached Zachariah. 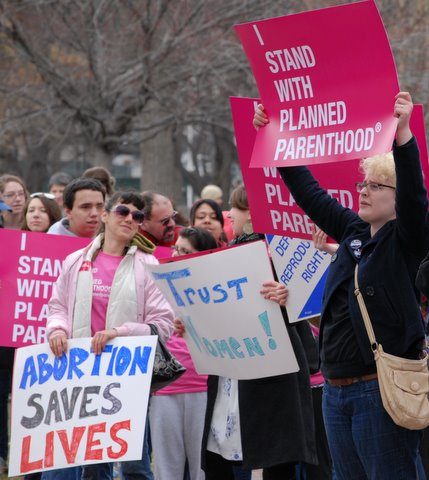 How is abortion health care?

At least 650 abortion advocates showed up to hear a line-up of speakers rant about the “rights” of the abortion industry, although the word abortion itself was carefully avoided as much as possible.  Terms like “reproductive health” and “freedom to chose” don’t have the same stigma.  The pro-abortion signage also avoided the abortion word, although I did see a sign that read: “Abortion saves lives.”  Go figure. What nonsense. 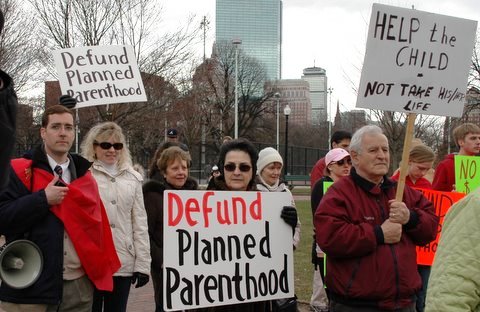 About 75 motivated pro-lifers, young and old, assembled nearby.  The rosary was recited aloud in reparation for the sin of abortion.  Hymns were sung.  And TFP bagpipers played Amazing Grace in memory of the countless innocent lives lost to the culture of death. A variety of homemade “Defund Planned Parenthood” signs were most visible.  The prayers and the music unnerved some of the pro-aborts. 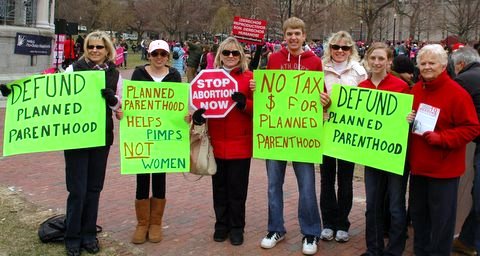 We met many fine pro-lifers who wanted to know all about our tour for traditional marriage in Rhode Island.   Thank God, the voiceless were given a voice.  Innocent life was defended.  May God protect our nation from the sin of abortion as well as same-sex “marriage.”

Please keep praying for us.   God bless you!