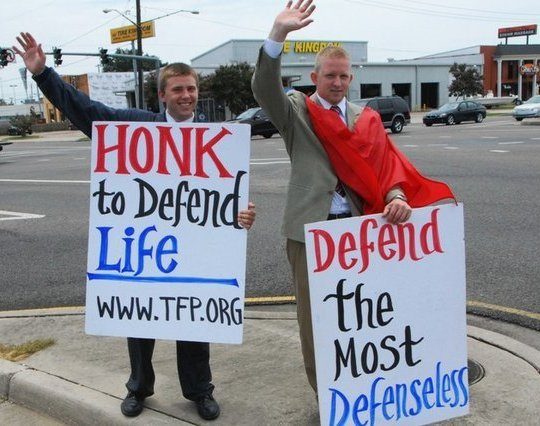 Fourteen volunteers with Tradition, Family and Property-Louisiana began their 10-day tour in defense of the unborn in New Orleans today.  After participating in the Call to Chivalry camp, several young men requested to join the caravan as a means to put into practice the ideals of Chivalry they learned during the camp.  It will be their first experience on such a public tour, which will reach major cities in Louisiana and Texas.

With "Honk to Defend Life" signs, banners, bagpipes and a supply of fliers titled 10 Reasons Why Abortion is Evil, you couldn't ask for a better team of cultural warriors.

Nobody Wants to Build Planned Parenthood

The first campaign was near Clearview Mall, where pro-life support was overwhelming. Honks rang out at a rate of several dozen per minute, and many people voiced their agreement as they passed.

"Thank you so much!" was the most common expression.  Others also said how they had recalled seeing the TFP campaign in previous years.

One man explained how a local Planned Parenthood facility under construction is facing real difficulties: none of the local cement companies will agree to pour the foundations for the abortuary.  In other words, construction companies in New Orleans do not wish to be accomplices to the pro-abortion culture of death.  To the group of TFP volunteers baking in the hot Louisiana sun, this bit of news was a great encouragement.

Lunch break:  authentic red beans and rice prepared by a kind and hospitable family in New Orleans. It was a welcome respite after the long hours in hot, humid weather.  The Louisiana style hospitality gave us the energy to continue.

Campaign Against Abortion in Kenner

The rush-hour campaign was held at a busy intersection in Kenner.

Again, the support for the campaign was overwhelming, steady and vocal.  One woman, among many, said, "Thank you so much for what you do!"  Others congratulated caravan members for their courage in standing up for what is right. One lady even stopped and joined us for the recitation of the rosary.

Unfortunately, however, police officers soon arrived.  "You cannot be on the neutral zone," they said, referring to the large public sidewalk where we were standing.  "There's a city ordinance against this, and you will need to step away and ask the private businesses for permission to stand on their property.  You can't do it here."  How strange:  The public sidewalk in Kenner is off limits to free speech.  Two more police officers arrived to make sure that we stepped away from the public sidewalk.  Something wasn't right at all.

In the meantime, the only thing we could do was straddle the line between the public sidewalk and private property, hoping that would work.  And it did, until the police returned to complain about the honk signs.  Apparently, there's an ordinance about honking as well.  "Do you have any signs that don't ask drivers to honk?" the police sergeant asked.  We did.  And the campaign continued.

Even without displaying out honk sings, passing vehicles still continued to honk.  It would be rather difficult for the police force to flag down hundreds of vehicles, I imagine.

Tomorrow, we will campaign for the unborn in downtown New Orleans.

Please pray for us as well travel the Bayou State.  Pray for the end of the sin of abortion not only in Louisiana, but in America and the whole world.

Our Lady of Prompt Succor, hasten to help us!