It is six o’clock in the evening. The toil of the day has come to an end. 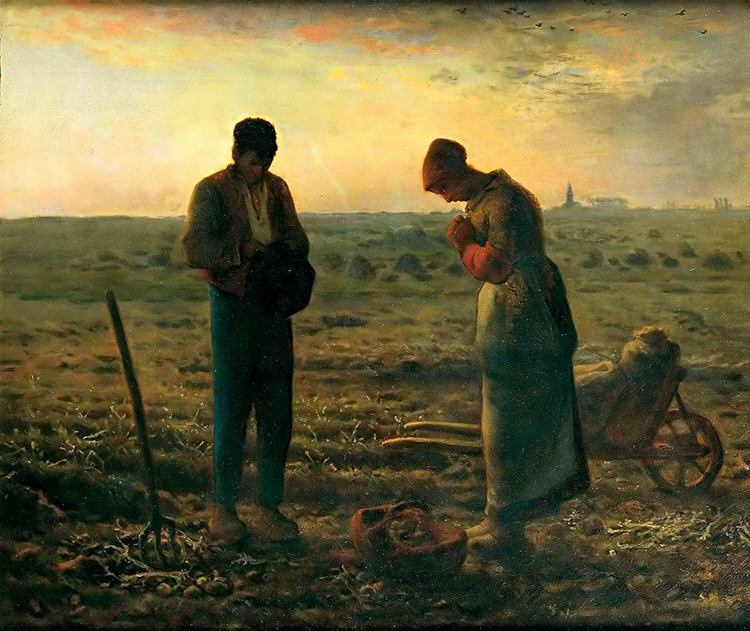 The Angelus by Jean-François Millet

The noble tranquility of the atmosphere envelops the vastitude of the fields, inviting one to repose and meditation. Nature is transfigured by a golden twilight, making everything glow with a remote and suave reflection of the inexpressible majesty of God. Faintly, in the distance, one hears the ringing of the Angelus. It is the crystalline and material voice of the Church, bidding one to pray. The two young peasants begin the prayer. Their physique manifests health and a long established habit of manual labor. While their dress is simple, in everything their bearing reveals purity, elevation, and the natural delicacy of profoundly Christian souls. Their modest social condition is, as it were, transformed and illuminated by their piety, which instills respect and sympathy. Their souls reflect the golden rays of the sun, but a sun much greater in every respect: the grace of God.

Truly, their souls’ beauty is the center of the picture. The magnificent surroundings serve as a background for the beauty of these two souls united by the Son of God.

Nothing in these peasants gives the slightest suggestion of disquietude or uneasiness. They are entirely in consonance with their means, profession and class. What other dignity, what other fortune could this couple desire?

In this painting, Millet admirably brought together the necessary elements for one to comprehend the dignity of manual work in the placid and happy ambience of truly Christian virtue.

Not always is country life so. Millet captured, in a lucky stroke of his brush, the acme of moral and material beauty. His picture has the merit of teaching men to see, scattered about in the uneventfulness of rural, everyday existence, the genuine, frequent sparklings of this Christian physiognomy of souls in an environment enlivened by the Holy Church.

Millet’s state of mind, which he communicates to whomever contemplates his masterpiece, is turned toward God and the reflections of spiritual and material beauty which He impressed upon Creation.

To be exact, only some excess of sentimentalism could be regretted if one were to make a critique of the painting from the psychological standpoint. 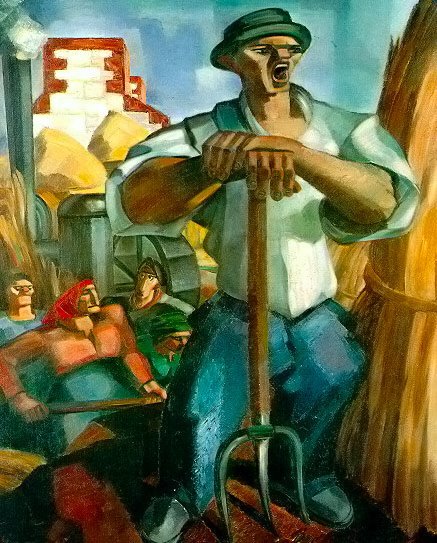 Could the same praise be made of the painting by Yves Alix, “Le Maitre des Moissons,” also inspired by country life?

The author failed to perceive, feel or accept in his view of agricultural work anything that makes it worthy of being carried out by a son of God.

In this painting it is not the spirit dominating matter and ennobling it, but rather the matter penetrating the spirit and debasing it.

Manual labor has impressed upon the people a certain brutality and, as it were, wickedness. Their countenances display a state of mind which reminds one of a concentration camp. If those in the background did not seem so hardened, if they were able to cry, their tears would be of hate; their moans, were they able to moan, would be like the grating of gears. The sadness, the evil, the cacophony of the colors, shapes and souls are manifested by the manner in which the main character shouts.

One does not know whether he is making a threat or uttering a blasphemy.

Yves Alix gathered, exaggerated and distorted to the point of delirium the aspects whereby work is expiation and suffering, and the earth a place of exile; he expressed with meticulous and, so to say, enthusiastic fidelity that in the human soul which is most heinous and low, presenting the ensemble as an actual and normal aspect of the spiritual, professional and everyday life of the worker.

Millet’s work of art calls to mind a prayer, while the nightmare of Yves Alix belches forth a puff of revolution.

If God were to permit the angels to beautify the earth and life, they would go about it by making those aspects that Millet sought to observe and assemble, more abundant, more beautiful and longer lasting. If He were to allow the demons of hell to disfigure men and Creation, they would do so by forming in men’s souls, bodies, and in the appearance of things, characters and environments such as those found in the painting of Yves Alix.

(*) This article was originally published in the magazine Catolicismo, Issue #9, September 1951. It has been translated and adapted for publication without the author's revision. –Ed.