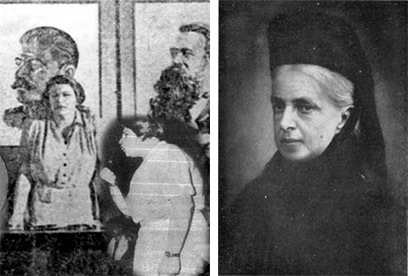 On the right, we have the Servant of God Maria Clotilda de Savoy Napoleon (1843-1911), outstanding for her birth, her grand personal distinction, as well as for her virtue. She will probably be elevated to the honors of the altars, since the cause of her beatification is already under way. By the nobility of her bearing, she represents a typical Christian lady of the nineteenth century wholly turned to a life of sacrifice particularly at home, applying herself with great dedication as a mother and wife according to the spirit of the Church. Though she is very feminine, her whole makeup mirrors an outstanding firmness that does not exclude a great kindness. In a word, she can be considered as an authentic expression of the true feminine ideal.

The Romanian communist, Ana Pauker, (left) is the archetype of a woman formed according to the norms of communism. Gross, masculine, showing neither the modesty nor dedication that a woman's place in society requires, she is a blatant tom girl without feelings, fitting the brutal and mechanical era ushered in by modern neo-paganism.
*    *    *
Click here to see a closeup of Ana Pauker as she appeared on the cover of TIME Magazine, September 20, 1948.

(*) This article was originally published in the magazine Catolicismo, Issue #21, September 1952. It has been translated and adapted for publication without the author's revision. –Ed.