The Church teaches that true and complete sanctity is the heroism of virtue. The honor of the altars is not granted to weak, hypersensitive souls that flee from profound thoughts, from acute suffering, from the fight, in short, from the Cross of Our Lord Jesus Christ. Mindful of the words of Her Divine Founder, “the kingdom of heaven belongs to the violent,” the Church canonizes only those who, in life, authentically fought the good fight, those who plucked out their own eye or cut off their own foot when it caused scandal, and sacrificed everything to follow only Our Lord Jesus Christ.

In reality, sanctification entails the greatest heroism, for it presupposes not only the firm and serious resolution to sacrifice life itself if need be to remain faithful to Jesus Christ, but even to live a prolonged existence on earth if God so desires, constantly renouncing everything most dear in order to adhere only to the divine will.

A certain iconography, unfortunately much in use, presents the saints quite differently: they appear soft, sentimental, with neither personality nor strength of character, incapable of serious, solid and coherent ideas; they seem to be souls guided only by their emotions and, therefore, totally unsuited for the great fights that always accompany earthly life.

The figure of Saint Theresa of the Child Jesus was especially deformed by bad iconography. Roses, smiles, inconsistent sentimentality, a soft life free of cares, a person with bones of rock candy and blood of honey — this is the idea they would like us to have of that great, that incomparable saint.

How all this differs from her true spirit — vast and profound like the firmament, shining and burning like the sun, yet so humble and so filial — which one finds upon reading her autobiography, The Story of a Soul.

Our two pictures represent, so to speak, two different and even opposite “Theresas.”

In the first, there is nothing heroic; this is insignificant, superficial and perfumed Theresa imagined by romantic and sentimental iconography. The second is authentic Theresa, photographed on June 7, 1897, shortly before her death on September 30 of the same year.

Her countenance is marked by the deep peace earned by great and irrevocable renunciations. Her features have a definition, a strength and a harmony possessed only by souls with an iron logic. Her gaze bespeaks tremendous sufferings in the deepest recesses of the soul yet, at the same time, reveals the fire and courage of a heroic soul, determined to advance cost what it may.

Contemplating this countenance, strong and profound as only the grace of God can make a human soul, one thinks of another Face: that of the Holy Shroud of Turin, which no man could have imagined and perhaps none dare describe. Between the Face of Our Dead Lord, which has a peace, a strength, a profundity and a sorrow that human words cannot express, and the face of Saint Therese, there is an imponderable yet very real similarity.  And why should it be surprising that the Holy Face impressed something of Itself on the face and the soul of one who in religious life called herself Therese of the Child Jesus and the Holy Face? 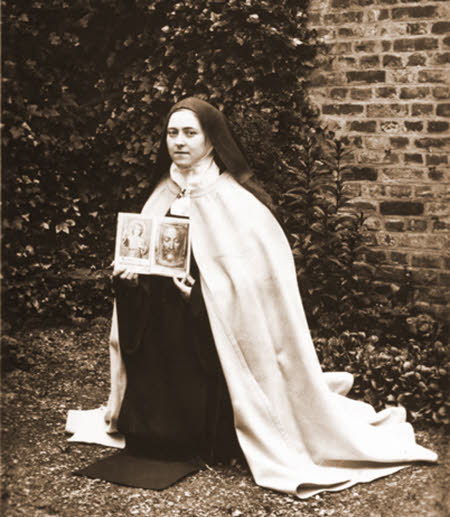 (*) This article was originally published in the magazine Catolicismo, Issue #30, June 1953. It has been translated and adapted for publication without the author's revision. –Ed.