Over fifty years before the Pilgrims landed at Plymouth Rock, Catholics held the first Thanksgiving in America.

It was on September 8, 1565 the feast of Our Lady’s Nativity that Spanish Catholics sat down for their first Thanksgiving dinner in the colonial town of St. Augustine, Florida.  Three things marked this event: a Catholic hero, a Mass, and a battle.

Both the year and the century were chaotic at the time.  Under King Philip II, Spain was the bulwark defending Christian civilization. Philip II had two pieces of news that concerned him greatly.  The Mohammedans had just besieged the tiny island stronghold of Malta garrisoned by the Knights of Saint John. The other piece of news was that French Huguenot pirates had landed in Spanish Florida. They were attacking Spanish vessels and perverting the natives to their sect. Something had to be done.

Philip needed someone to root out the Huguenots, settle Florida and bring the pagan natives to the Catholic fold.  Enter Pedro Menendez de Aviles, the greatest sea captain of his day.  The King summoned Menendez to lead this expedition and plant the Faith in America.  The brave Menendez accepted this mission and put his whole soul into the expedition.  He financed it and even suffered bankruptcy as a result.

He gathered his fleet and set forth.  Out of over thirty vessels, only six made it to Puerto Rico because of a hurricane.  The French now outnumbered him. He conferred with his remaining captains.  Some wanted to turn back. Others wanted to wait for promised reinforcements. However, Menendez wanted the greater glory of God. He told his men that although all seemed against them, God was on their side.  Since this was a mission not only for the king but also for God, he said they must go forward.

He threw caution to the wind and put his confidence in God and Our Lady.

A Battle of Faith

On August 28, 1565, the feast of St. Augustine, Menendez sighted land. He immediately sought the Huguenot stronghold of Fort Caroline. A few days later, he sighted four warships (all larger than his own) just off the coast of what is now Jacksonville, Florida.

Again he held a conference with his captains who begged Menendez to turn back.  Menendez reminded them that this mission was not for self-glory but for God. He also noted their ships could never outrun the French who were already making their way towards them. The only solution was to go straight at them, which they did.

Menendez sailed toward the French all evening and only reached them around midnight. He ordered his men to the guns.  Menendez hailed the French ship and inquired who they were. The French responded that they were Huguenots sent by Gaspar de Coligny (the political leader of the Huguenots in France). Pedro Menendez responded by telling them his name and his reason for coming: to hang all heretics he found and to plant the standard the Catholic Church in Florida.

The Huguenots responded by blaspheming while Menendez fired a broadside at the French, who fled after a quick skirmish. Only the next morning did Menendez realize how dire his position was.  Several land batteries were pointed right at him and other French ships (excluding the four he had put to flight) lay in harbor.

Menendez prudently headed south to find a safe harbor and plant his standard.  On September 8,1565 he landed on the feast of Our Lady’s nativity, at a safe harbor which he named St. Augustine, now the city with the same name.  His first actions were to plant the Cross and the standard of Catholic Spain.  He claimed the land in the name of God.
All present, including the curious natives, adored and kissed the Cross.  Then the first official Mass was celebrated in what is now the United States. 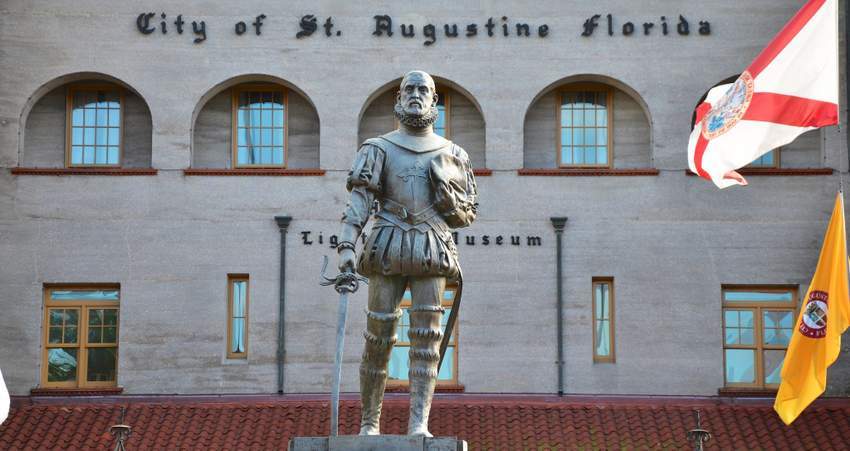 Menendez was quick to make friends with the native population. To celebrate the landing, the natives brought out all sorts of food. Together the Spanish Catholics and Florida Indians held a great banquet of thanksgiving in honor of the birth of the Mother of God. Indeed, it can be said that this was the first Thanksgiving on American soil.

The Huguenots, however, who outnumbered the Catholics, were still prowling around the area. Menendez acted quickly by unloading his supplies and sending his ships to Cuba for reinforcements. Soon afterwards, the French appeared at the mouth of the harbor. The low tide kept the French at bay for several hours. But the odds were against Menendez and all seemed lost. Since it was the feast of the Holy Spirit, Menendez prayed for guidance.  Almost immediately a storm broke the tranquility of the day.  A great gale then pushed the French ships south and eventually shipwrecked them all (unbeknownst to Menendez).

Menendez saw the hand of God in his deliverance. He led his men in prayers of thanksgiving and lost no time by asking for five hundred volunteers to attack the fort to the north. As most of the Huguenots had manned the ships, the fort was left with few troops to defend it.

A friendly Indian led Menendez and his men through the Florida swamps in chest-high water in the middle of a hurricane.  Three days later, four hundred of the five hundred volunteers arrived near the fort.  With the cry of “Santiago (Saint James) and at them,” Menendez led the charge and scaled the walls in the downpour.  The French were caught off-guard.  Only twenty escaped.

As Menendez reentered St. Augustine, the remaining Spanish met them with the singing of the Te Deum hymn of thanksgiving.

Soon some natives brought news that the shipwrecked Huguenots were stranded on shore just south of St. Augustine. Menendez led fifty men to what is now Matanzas inlet.  He soundly defeated more than five hundred Huguenots led by Jean Ribault in two separate engagements. Thus the path was open for planting the Holy Catholic Faith in America.

Confidence in God and Our Lady

The rest of the story of the Menendez expedition is one heroism, conversion and suffering. This Catholic history of America is unfortunately hidden.  The account of the real first Thanksgiving is almost unknown.

The Catholic founding of America under Pedro Menendez de Aviles highlights the virtues of confidence and intransigence.  Without these two virtues, the Catholics would have turned back and the course of history changed.  However, they placed trust in God and the Blessed Virgin Mary. God supplied them with victory and they gave glory and honor to Him by giving thanks in St. Augustine, Florida on September 8, 1565.

(This article was published by TFP.org)