The continuing debate over the debt ceiling raises matters of such a magnitude that it is easy to be overwhelmed and confused. Everyone can agree that there is obviously something terribly wrong about a nation that must survive by borrowing against its future.

Elementary economics teaches us that we cannot live beyond our means indefinitely. There comes a time when such spending must stop and responsible government must prevail. This is something we can agree upon in principle.

However, that is not what is at stake at the present moment. Unfortunately, we have put ourselves in a crisis situation. We should not have done so, but we have. Like it or not, our debt obligations now weigh heavily upon us and we are constitutionally bound to honor them. Commitments we have made to retired Americans, military men and others must also be met. At the same time, our Treasury bonds serve as one of the few stable elements for the whole global economy, which now awaits anxiously a decision that must soon be made.

In this crisis of our own making, we must take extraordinary measures to insure not only our financial survival but that of the Western world, which is heavily dependent upon our stability. At this point, the most reasonable solution lies in raising the debt ceiling and offset it by non-defense spending cuts. It is not the final or even the best solution, but it is an immediate and necessary step to keep at bay a much greater threat that looms on the horizon: the collapse of our economy.

Put out the fire

Our situation might be likened to that of a building on fire. There are those who say we should leave the fire burning and concentrate on punishing the arsonists who caused the fire and thus insure they will not do so again. Meanwhile the building burns to the ground. At the present moment, our attention must be focused on putting out the fire, even if it means breaking down doors and damaging the integrity of the building in which we all live. After the fire has been put out, we will be able to secure the building and take measures and we can and must insist that the arsonists be called to task.

There are those who claim that corrective measures can only be taken in an atmosphere of crisis. In our sensational times, once the fire is put out, people forget about the problem. They claim that our insistence upon raising the debt ceiling is basically "kicking the can down the road." We share their anguish, but reiterate that, in the present circumstances, not raising the debt ceiling amounts to allowing the building to burn down.

We do owe it to ourselves to find the arsonists and take measures outside the atmosphere of crisis. However, for this to happen we must recognize that this is not so much a budgetary problem as a moral one.

Solving this problem involves a change of mentality whereby we break with the culture of entitlement, subsidies and benefits which has dominated our lives for decades. We have abandoned the loving support of family and community, and in its stead conservatives and liberals alike became vitiated by this culture where we turn to government to solve all problems. Any threat to this government support system immediately brings down universal protest. This overdependence on government is the opposite of the principle of subsidiarity, which requires problems to be solved at the lowest possible level. 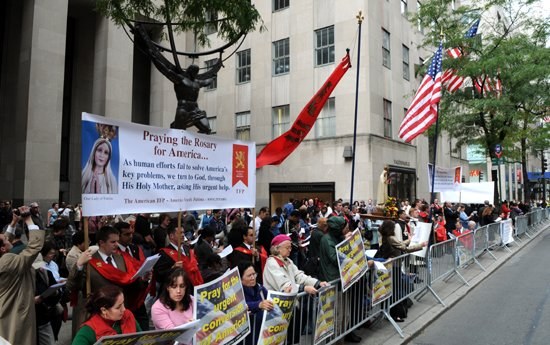 Over one hundred thousand American Catholics nationwide take to the Public Square each October in peaceful gatherings.

If we are serious about solving the debt crisis, Americans must be willing to assume once again responsibility for their lives and actions. We must accept once again the suffering and sacrifices that make up our lives. And, most importantly, we must turn again to God who in His Providence will provide for our needs much better than any overdrawn government.

A call to prayer

To solve our moral problem, we must seek outside help. This is a problem that is beyond human solutions. That is to say, we must pray for the grace to change our lives. As this involves everyone, we would do well to pray together in the public square.

Indeed, this is what the American Society for the Defense of Tradition, Family and Property (TFP) has been doing for four years and will continue to do. On a given Saturday in October, the American TFP mobilizes over one hundred thousand American Catholics to pray the Rosary in the public square. In 2010, there were 5,963 Public Square Rosary Rallies. On October 15, 2011, there are 7,000 planned.

These praying Americans use a large banner to explain their purpose to the passing public, which reads: "Praying the Rosary for America... As human efforts fail to solve America's key problems, we turn to God, through His Holy Mother, asking His urgent help."

May the Blessed Virgin Mary take these nationwide prayers into account now and help our elected political leaders urgently find a way to resolve the present impasse.