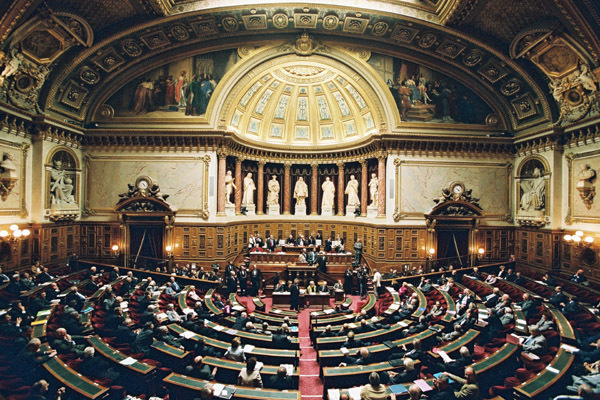 In the first picture, 1,500 representatives of the United Nations meet in the Assembly Chamber of the Luxembourg Palace built between 1615 and 1620 for Maria de Medici under the direction of Solomon de Brosse. The ambience is admirably suited to an event of such magnitude. The very natural order itself requires that places where great events take place be full of good taste, distinction and brilliance.

And that is what is found there. This can be seen in the woodwork, colonnade, the simple and noble lines of the tribune and table of the presidency and the solemn bearing of the grand marble figures that illuminate the ambiance with the splendor of centuries of culture and glory. One sees force, majesty, grace and wealth. In a word, everything concurs to make one judge this place worthy of a gathering of world representatives. 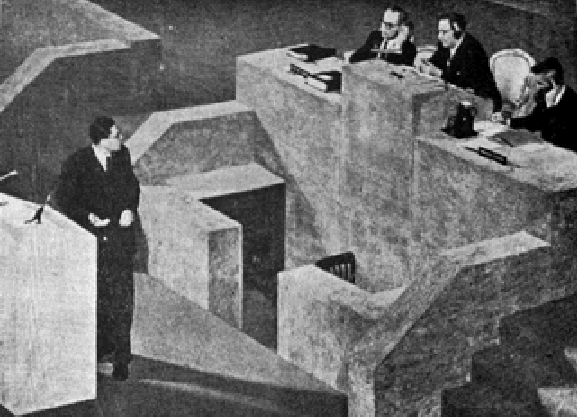 Are these the brutal, crushing sinisterly cold forms of a criminal tribunal? Or is it a table for police interrogations, over which floats implicitly but heavily the threat of a concentration camp?

By no means. This is the tribune of the UN designed in accordance with a certain type of modern taste. On his feet, Andrei Gromyko, delegate of the USSR turns heavily toward the President, Percy Spender, to whom he declares that Russia will not sign the peace of San Francisco.

Such is the level to which a certain “artistic” schools have reduced modern life.

In the Luxembourg Palace, the composition of the ambience took into consideration, not only the material and technical conveniences, but mainly the spiritual ones, by satisfying everything that the human spirit might require for the acts for which the hall is destined. It is a decoration made by men who believe in an immaterial soul. The tribune in which Gromyko speaks denies everything to the soul. It completely ignores the soul. It was constructed only in function of material conveniences. In a word, it is typically materialistic.

(*) This article was originally published in the magazine Catolicismo, Issue #17, May 1952. It has been translated and adapted for publication without the author's revision. –Ed.