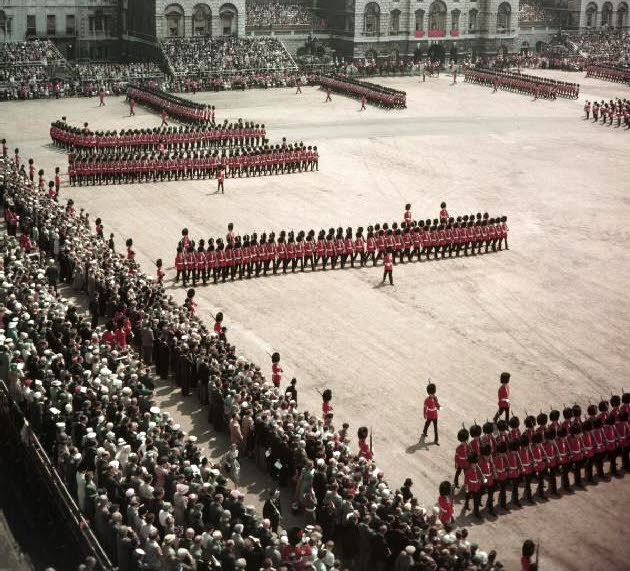 From every side of the parade grounds, with habitual and quite natural enthusiasm, a huge crowd watches a trooping of the Queen’s Royal Grenadiers in their ceremonial uniforms. New military tactics forced uniforms like these into obsolescence long ago. Nevertheless, these black trousers, red coats with white belts, gloves and ornaments topped with distinguished bearskin hats, are preserved for higher moral ends. Maintaining the tradition of the armed forces and showing people the splendors of military life.

Glory must be expressed in symbols. Indeed, God uses symbols to manifest to men His own grandeur. In this, as in all else, we must imitate God. Thus we see the Royal Grenadiers’ uniforms and their impeccably rhythmic and aligned marching. One senses the pride with which the standard-bearer carries the national flag and the troop commander indicates the direction of the parade. One can almost hear the beating of the drums and the sound of the trumpets. All of these symbols express the moral beauty inherent in military life along with the elevation of sentiments, the willingness to shed one’s blood; the strength for striving, risking and winning; the discipline, gravity and heroism.

There is glory, and true glory, shining in this whole ambience.

But after all, is glory only this? Does glory consist just in dressing in anachronistic uniforms, executing maneuvers having no relation to modern battle, playing drums and trumpets and advancing with firm step to give oneself and others the impression that one is a hero? Does glory consist in advancing “courageously” on a field without obstacles or risks, launching attacks against a nonexistent enemy, having the only reward the inebriating applause of a crowd?

Is this glory, or is this theatrics? 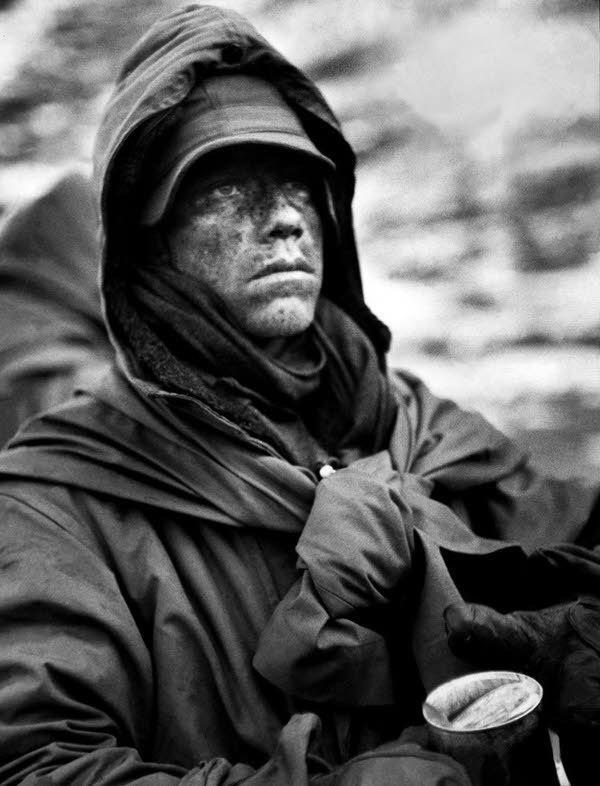 The young American soldier seen here from the Korean War illustrates another aspect of military glory. Entirely immersed in the tragedy of armed warfare, he seems not to have a defined age; he has the vigor of youth, but his freshness and brilliance are gone. His skin, toughened by endless days under the sun and endless nights of wind and storms, seems to have taken on an almost leather-like firmness. He hasn’t the least concern about the elegance of his attire. His clothing serves to shield him from the harsh elements and to facilitate quick and agile movements whether he is in the mud, thickets or advancing over steep hills — all under the relentless action of battle.

Everything in this man is ordered towards fighting, resisting and advancing. The light of a smile is rarely seen on his face. His gaze appears to be fixed in ceaseless vigilance against men and the elements.

This man is not concerned with grand movements or theatrical gestures. He concentrates on the thousand details characterizing the real daily life of soldiers. He does not want to play a great role, showing off for himself or for others. He wants only the victory of a great cause. It is this that explains his seriousness, his dignity, and his will to resist.

Although permeated to his last fibers by great exhaustion and pain, his inflexible resistance of soul and body overcomes his weariness. He feels his pain vividly, but accepts it to its ultimate consequences out of love for the cause for which he fights.

This is the painful and perhaps tragic face of military life. Yet, this is where the merit is and where glory is born.

Beautiful uniforms, gleaming weapons, cadenced marching, great parades with trumpets and drums and the endless applause of enraptured crowds are legitimate and even necessary appearances, but only to the extent that they express a desire to fight and sacrifice for the common good. All of these would amount to nothing but theatrics were it not for authentic and proven courage, such as that of the Queen’s Royal Grenadiers.

True, these are considerations of a natural order. However, from them we may draw conclusions that reach a higher sphere.

The life of the Church and the spiritual life of each faithful Catholic are ceaseless struggles. Sometimes God gives souls admirable moments of interior or exterior consolation, and sometimes He gives His Church days of splendid, visible and palpable grandeur.

However, the true glory of the Church and of the faithful comes from suffering and from fighting.

It is an arid fight, with neither palpable beauty nor defined poetry. In this fight, one sometimes advances in the night of anonymity, in the mud of indifference or misunderstanding amidst storms and bombardment unleashed by the conjugated forces of the devil, the world and the flesh. Be certain that this fight fills the angels of Heaven with admiration and attracts the blessings of God.

(*) This article was originally published in the magazine Catolicismo, Issue #78, July 1957. It has been translated and adapted for publication without the author's revision. –Ed.