On October 11, I went to Georgetown University with two of my colleagues for a class project. Our mission: interview students about the annual “Coming-Out Day” on campus, which is part of a month-long pro-homosexual celebration known as “OUTober.”

Since Georgetown is the oldest Catholic university in the United States, one would think that Catholic doctrine and tradition are upheld there.  However, this is not the case. Sadly, we found the exact opposite to be true.

“That Belief is Wrong!”

As my classmate and I approached Red Square -- the free speech zone -- we saw posted high on the brick wall of the administration building a large banner announcing: “Coming Out Week: Celebrating our Lesbian, Gay, Bisexual, Transgender, Questioning, and Ally communities.” Immediately below the banner two male students, wearing rainbow beads and tee-shirts with the words “I am,” manned a folding table draped with a large "GU Pride" banner.

The table offered pro-homosexual buttons, rainbow necklaces and scarves. Nearby stood a life-size “closet” door attached to a frame covered with a homosexual flag. The two students, one wearing a rainbow Dr. Seuss-like hat, turned to us as we approached: “How's it going boys?”“Good” was all we could muster.  We asked them for an interview. “Sure,” said the one to our right.  “Okay, so today is National Coming-Out Day... people come by, pick up free stuff, and show off their pride! It's about letting everyone around you know that they support the community or they’re a part of it.”

My colleague, holding the camera, then asked how they justify such things given that "the Catechism of the Catholic Church says that homosexual acts are intrinsically disordered.”— “Unfortunately, the Catholic Church is sort of a hierarchical institution; it doesn't always recognize the importance of individual revelation.”— “But how does that explain it (homosexual acts) as being intrinsically disordered?" continued my friend.Georgetown student: — “Well, I'll say very blatantly, that that belief is wrong! At Georgetown," he continued, "there are Jesuits who think that what GU Pride does is wrong, but there are Jesuits who love what we do and who are supportive of the community. The Catholic Church isn't as undemocratic on the more human, sort of the, umm, each level of the, each individual... what is it? Oh, each individual diocese, as people make it out to be. Uhh, and that's, like I said, demonstrated here, where what we do is celebrate diversity, celebrate identity, which is so critical to the Catholic mission.” 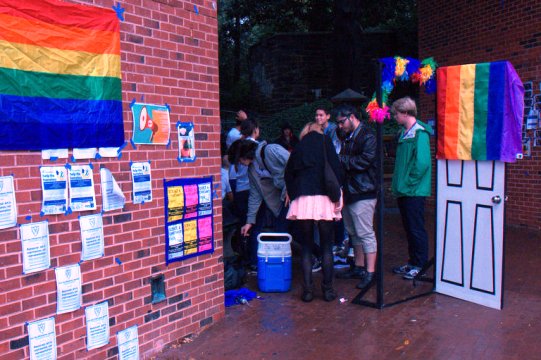 At about 12:45 we went to film the “coming out” in Red Square, Georgetown's free speech area.  As we approached, a PBS camera crew stepped past us holding a large professional video camera and a boom microphone. They were intent as they maneuvered through the highly excited crowd of about fifteen to twenty hooting and hollering pro-homosexual students, filming the scene. Meanwhile, a female student with a tee-shirt that read “I am” was being interviewed by a separate member of the PBS crew.

“I was worried Georgetown was going to be super-conservative…”

After we left Red Square, we did a few more interviews on the public sidewalk. One woman, a Georgetown student, said, “I kind of didn't want to go to Georgetown because it was Catholic. I was worried it was going to be super-conservative, but I found that it isn't.”

Finally, in the last interview we conducted, two students called us bigots, saying, “You need to think more!”

The "Smoke of Satan" at Georgetown

Decades ago, Pope Paul VI warned that “the smoke of Satan” had entered the Church. He also said that She was undergoing a mysterious process of “self-destruction." With the steady promotion of the sinful homosexual lifestyle at Georgetown University, the smoke of Satan appears to be enveloping the once-respectable institution with the noxious fumes of the sexual revolution.

Earlier this year, a Canon Law petition of more than 2,000 Catholics represented by Academy Award-winning director William Peter Blatty, a Georgetown alumnus, was submitted to the Holy Father.

“The petition submitted to the Pope,” said Manuel A. Miranda, who serves as Mr. Blatty’s counsel, “is more than 200 pages and contains more than 480 footnotes, 99 appendices, 124 witness statements, and a commissioned 120-page institutional audit of Georgetown. We have documented 23 years of scandals and dissidence, more than 100 scandals in the most recent years alone.”

“Georgetown University,” Miranda continued, “has been captured by the ideology of radical autonomy. It pervades everything. Academic freedom is now prisoner to intolerant new orthodoxies, and Catholic moral teaching has surrendered to the dictatorship of moral relativism.

The Cardinal Newman Society has been publishing detailed updates about this issue.

Indeed, rampant relativism slowly weakens in consciences the notions of good and evil, sin and grace, vice and virtue. It blurs the Church’s clear teaching on every aspect of sexual behavior. Virtue is replaced with a pathetic feel-good "spirituality," which has led us to where we are today -- the celebration of unnatural vice at America's oldest Catholic university.