Our first stop today brought us to downtown Columbus. Despite bitter cold winds, and icy temperatures, the campaign proceeded with great success. Amid the many honks and expressions of support, a few people stopped to debate.

One passing man decried our rejection of socialist healthcare, claiming that the socialist system in Ireland is an exemplary model of what American healthcare should be. A brief discussion with TFP volunteer Damien Murphy, himself from Ireland, exposed the man's argument for the falsehood it was.

The next campaign took place at a busy intersection just outside Ohio State University. With hundreds of cars passing at each cycle of the traffic lights, the honk signs were used with great success. The responses of the passing motorists were usually positive, and often enthusiastically so. As Mr. Charles Sulzen offered a TFP flier to man in his car who responded: "Sure, thanks. Make sure you don't get hit out here, our country needs people like you."

The few who vocally support Obamacare tend to express themselves in the same way: obscene gestures, insults, but no arguments.

Please keep us in your prayers as we fight in defense of God's Holy Church, and true American freedom. 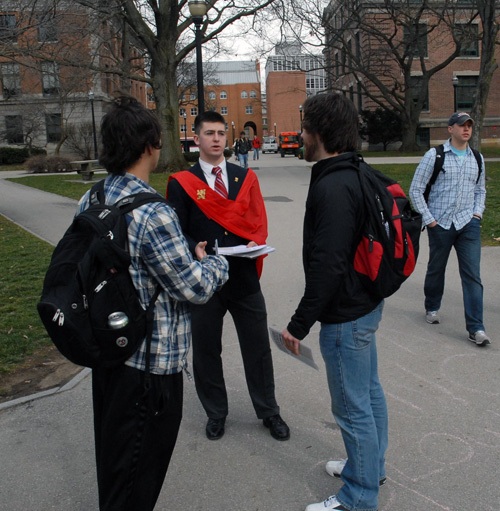 Arising early on Friday, we prepared for what we knew would be the most intense campaign yet: The Oval, right in the very heart of Ohio State University. Raising the TFP standard and unrolling our banner, we immediately met students who voiced their support or opposition. Our bagpipes once again echoed with distinction, serving to attract attention and draw crowds from across the sprawling campus, which has a huge enrollment of over 52,000 students. As one passer-by remarked: "Wow! Those bagpipes have been playing all morning!" Many others paused to take pictures of our banner or film the bagpipers with their phones.

Intense debates broke out everywhere. One passing student exclaimed: "That's it, I'm with you one hundred percent!" Others parroted long-refuted liberal mantras: "God has nothing to do with what I do with my body," and "Religion has no right to tell anyone what to do." One man claimed that morals are simply a societal construct, and completely changeable. "The consensus determines what's right and wrong."

But TFP volunteer Mr. Peter Miller questioned his relativist idea: "So if the consensus agrees that murder is ok, would it make it ok?" The liberal students answered: "Yes, then murder would be ok." His outlandish comments shocked his own classmates, who admitted how ridiculous his assertion was.

One professor even asked for a TFP flier to use in teaching the day's class. 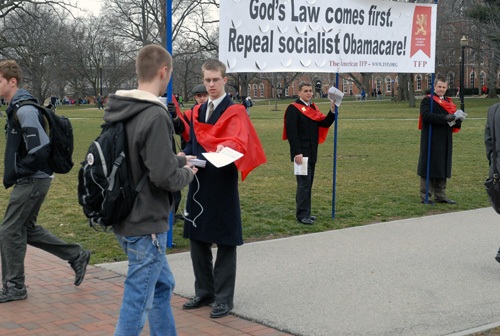 Also untenable was the oft-repeated idea that Our Lord Jesus Christ was a socialist. Lacking any scriptural evidence, this argument quickly fell apart. One passing woman, who had begun loudly proclaiming the myth of overpopulation, responded to our slogan -- "A Child is a blessing, not a disease" -- with shocking expressions of hatred against babies. "I hate babies!" she said. A man standing near took the opportunity to level some disgusting and unrepeatable blasphemies against Our Lord.

"You're pro-life, right?" asked a law student who stopped to help us debate against a self-proclaimed anarchist. "I need to show you something," he said. Pulling out his laptop, he showed us a bumper sticker affixed to the top of his computer: "Abortion is an act of violence" the sticker said. "In the classroom I display this and it makes the professors get sick. They really hate it."

The highly varied nature of the responses and arguments provided good evidence for the interconnectedness of all moral issues, and why it is essential that we stand and fight. The consequences of this battle have a far-reaching influence beyond the healthcare debate. The sanctity of innocent life, the protection of marriage, and the rejection of blasphemy all come together in this battle.