Following the epic campaign of yesterday, we were eager for whatever today would throw at us. Our first stops, at local shopping centers in Cincinnati, resulted in the distribution of hundreds of fliers. Our first street campaign with the full complement of bagpipes, standard, and banner, took place afterwards, along a busy intersection. The positive response on the part of the public was astounding. Even veteran TFP members, who have campaigned for years, were struck by the sheer volume of support being drawn by our honk signs. 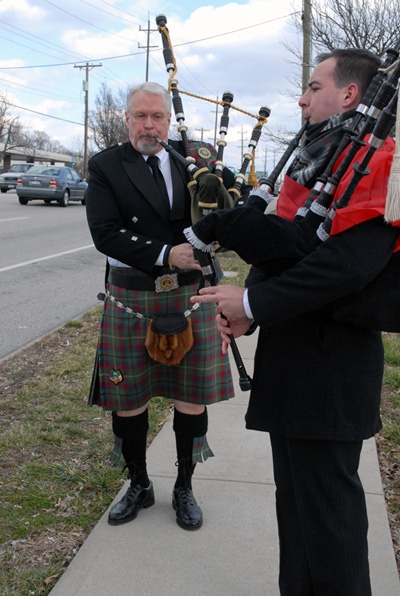 The support did not stop with the honks, however. Several people parked their cars and came to talk to us, and join the campaign for a time. At one point, a bagpiper, in full array, stopped and played for the campaign. "We saw you earlier and I told my wife that we would stop if you were still here on our way back. I'm honored to play with you."

After several hours, we took a lunch break at Panera Bread. As we sat down, we were surprised to see a lady who had stopped to thank us while we were campaigning. She was emphatic and enthusiastic in her thanks, and insisted on paying for our lunch. "Allow me to treat you to lunch," she said. "You made my day!"

After lunch we returned to the same intersection where support continued to be very strong. At times, the honking against Obamacare was deafening. We later retired to a local Catholic Church and were fortified by prayer and the reception of Holy Communion, ready for another full day of activities.