What is the goal of Catholic education? The answer is obvious: Form new generations of faithful Catholic leaders.

This, apparently, is no longer the case at Georgetown University, the oldest Catholic university in the nation founded in 1789.

The branch of this group at Georgetown came under national attention last year when it supported Planned Parenthood president Cecile Richards’ speaking engagement on campus.  Allix Hillebrand – a leader of the group and a self-described "future abortion provider" – features a picture of herself with the notorious abortion activist Richards on her twitter account.

Aside from its overt political activism, Medical Students for Choice (MSFC) hosts so-called “papaya workshops” where students learn how to perform procured abortions using fruit.  "Papaya workshops," the group's web site reads, "provide students with the perfect setting in which to learn and practice Manual Vacuum Aspiration (MVA) technique in a hands-on setting." 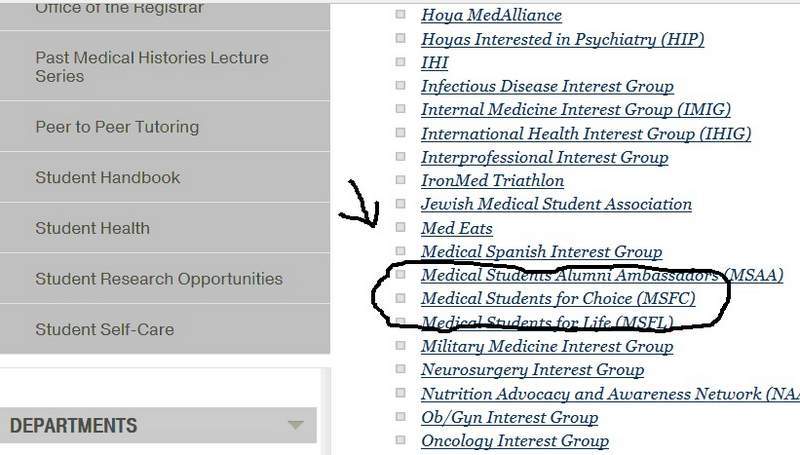 According to a post by MSFC on Facebook, students at one such workshop will, “Learn to perform an abortion using this quiet, portable technology. At the end, Dr. Costescu-Green will give a special demo of a 2nd trimester abortion using dilation and evacuation simulators.” In another post, they show groups of students from various universities participating in the abortion training.

Laura Kirkpatrick, another Georgetown University student and a seasoned abortion advocate, sits on the national board of directors for Medical Students for Choice.

When Planned Parenthood's president was given a platform on campus, Georgetown brushed legitimate criticism aside -- including the concern of Cardinal Donald Wuerl -- stating that they “are committed to sustaining a forum for the free exchange of ideas” and “providing a forum that does not limit speech.”

"Any club or forum that promotes the deliberate killing of innocent unborn babies is immoral.  And every medical student who enters the health field with the twisted intention of dismembering innocent unborn babies with a vacuum should not be given a license to practice medicine," he said.  "Providing procured abortion is malpractice.  Real doctors don't kill their patients.  They cure and heal them."

"Georgetown University, a Catholic institution, can't claim to be committed to the sanctity and dignity of human life while allowing a club that teaches medical students how to kill unborn children," continued Ritchie.  "Pro-abortion students should never be given a forum or platform on which to spread their harmful lies.  If you're really Catholic, you will defend the right to life and fight the Culture of Death.  But if you favor the sin of abortion, you really can't call yourself Catholic."

"While dedicated pro-life students at Georgetown are working hard to build a culture that respects the right to life, this pro-abortion club is undermining their noble efforts," Ritchie said.  "The problem really needs to be corrected."